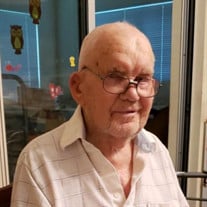 Those we love don't go away, they walk beside us every day. Unseen, unheard, but always near, so loved, so missed, so very dear.... Douglas R. Graham, 94, of Englewood, Florida and formerly of Smithboro, New York, passed away on December 27, 2020. Doug was born on a cold winter’s day on January 29, 1926 in Straits Corners, NY a son of the late James B. and Mary L. Helin Graham. He was a graduate of Owego Free Academy and following graduation enlisted into the US Army where he proudly served his country during WWII. On August 21, 1948, Doug married Beverly J. Root, together they have shared 72 years of marriage. Doug was a long-time employee of Kennedy Valve in Elmira where he spent 35 years working as a tool and die maker. Following retirement in 1987, he and Bev moved to Florida where they enjoyed the warm sunshine and card playing with friends. Doug enjoyed woodworking, was known as a true jack of all trades, Doug could “fix anything” and tinkering to make anything work. Doug and Bev also loved to travel, fond memories of family trips to the Catskills and Adirondacks always were a special time. Time spent with his family, always warmed his heart. A devoted and loving husband, brother, uncle, grandfather and great grandfather his greatest pleasure was to give whatever he had to others. Doug lived life with grace, dignity, humor and courage. Doug will be missed by his wife, Beverly; his sister-in-law: Anna Moon-Root; his daughters: Marsha Graham and Wendy Kreh; his grandchildren: Teddy Kreh and Amanda Danforth; great grandchildren: Ally Anna, Teddy Jr., and Isabella; his siblings Pauline (Ken) Gage, Phyllis Van Vleit, Larry (Angela) Graham, Bill (Connie) Graham, Verna May Rogers, Pat Brown, and Barbara (Gary) Wayman; David (Barbara) Graham; and many nephews and nieces. Douglas was greeted in heaven by his parents; his siblings Kenneth Graham, James Graham, Helen Roper, Dorothy Graham and Jack Graham; his daughter Laura; and grandchildren Daniel and Jessie. Family and friends are invited to attend a memorial service and celebration of Doug’s life on Friday, January 8th at 1pm at the Lemon Bay Funeral Home, 2 Buchans Landing, Englewood, FL 34223. Memories and condolences may be shared by visiting his guestbook at www.sutfinfuneralchapel.com

Those we love don't go away, they walk beside us every day. Unseen, unheard, but always near, so loved, so missed, so very dear.... Douglas R. Graham, 94, of Englewood, Florida and formerly of Smithboro, New York, passed away on December 27,... View Obituary & Service Information

The family of Douglas R. Graham created this Life Tributes page to make it easy to share your memories.

Send flowers to the Graham family.