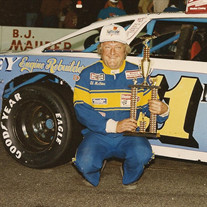 Ask anyone that walked through the parking lots at Northeast Bradford as a kid about Bus 5, and you will be sure to hear stories about how cool it was, especially in the 80s and 90s. Sitting next to ordinary school buses, Bus 5 was anything but understated, with its tinted windows and a top-of-the-line stereo system, and it always seemed to be parked in the best position in the parking lot, so kids were off and on in a flash. The driver was edgy and flashy too. He was a no-nonsense kind of guy, with a loud, distinct voice, a great big laugh, a crooked grin, and under it all, a real soft spot for kids and people. Those very qualities are what made Edward J. McGuire one of a kind, the guy who rarely did anything inside the box. Born on February 9, 1945, to Edward and Helen (McKean) McGuire, Ed was a twin to his sister Ellen, and they were raised by Ray and Florence Green. From an early age, it was evident that for Ed, life was to be wrangled, harnessed, and lived. It was about pushing the limits, testing the boundaries, and not being afraid to take risks. His tenacity gave him real entrepreneurial success as the founder of McGuire’s Garage, McGuire’s Septic Service, and EJM Energy Services. Ed could make anything exciting. If you stopped by his garage in Rome, there was always someone there, or something going on. It was consistently bustling with laughter, garage talk, arguments about engines and cars, and you could count on being greeted by his beloved dogs (like Fuzz) and meeting fascinating characters from all walks of life. When you called McGuire’s Septic Service, the vehicle that arrived in your driveway was not some industrial-looking piece of equipment, but a hot pink truck, decorated with cartoon skunks. Ed loved his toys too, and every motorcycle, RV, car, and pick-up always had a serious wow factor, a genuine reflection of their charismatic owner. But the real WOW that Ed McGuire brought to this world came on Saturday nights driving race cars. For over fifty years, he spent many a weekend lighting up local racetracks. Early on, he drove cars for a couple of different teams, but it was when he got behind the wheel of his “51 Saturday Night Special” that he set the world on fire. Anytime “Steady Eddie” McGuire took to the track, he made sure to give fans, foes, and the guys he was racing against a thrilling ride, pushing his flashy machines deep into corners and going high on the outside. In later years, he stepped out of the car and took on the role of car owner, managing a variety of race teams over the past twenty years. Because he encouraged his guys to take risks, to go above and beyond, and to dare to do more, McGuire Motorsports won the Race of Champions Sportsman Modified and the Modified races in Oswego, NY in 2006. His years of commitment to local track racing was recognized in 2017 when he was inducted into the Race of Champions Hall of Fame. On Monday, January 22, at the age of 72, Ed passed away at home following a period of declining health, moving into the next chapter of his story with bravery and a willingness to take on anything. Ed leaves behind several people who will miss his straightforwardness and his gritty sense of humor including his wife Betty, his son Ray, siblings Pamela (Robert) Northrop, Ellen (Ed) May, Sheila McNeal, Judy Posen, David (Cheryl) McGuire, Michael McGuire, Paul (Lou Ann) McGuire, Laurie McGuire, and Mark McGuire; sister-in-law Nancy (Al) Beeman, brothers-in-laws Billy (Darlene) Brewster and Dale (Beverly) Brewster and several nieces and nephews. Ed also leaves countless special friends, neighbors, school students, and will be very missed by his extraordinary group of racing family, friends and fans. Those who knew him and loved him are invited to celebrate all he gave to this world on Saturday, January 27th from 1-3 pm at the Wysox Volunteer Fire Company, 111 Lake Rd, Wysox, PA. A time of remembering will follow calling hours, and there will be a luncheon. With Ed, there was no pretense, and as such, his family requests that those who attend wear their favorite racing shirts and hats, jeans, and sneakers as they visit, share some stories, and have a laugh or two, as that is what Ed wanted. Those who wish may kindly consider a memorial contribution to the Wysox Volunteer Fire Company, PO Box 2, Wysox, Pa 18854 in loving memory of Edward J. McGuire. Memories and condolences may be shared by visiting his guestbook at www.sutfinfuneralchapel.com Caring assistance is being provided by the Cooley Family of the Sutfin Funeral Chapel, 273 S. Main St., Nichols. ain St., Nichols. www.sutfinfuneralchpael.com

Ask anyone that walked through the parking lots at Northeast Bradford as a kid about Bus 5, and you will be sure to hear stories about how cool it was, especially in the 80s and 90s. Sitting next to ordinary school buses, Bus 5 was anything... View Obituary & Service Information

The family of Edward J. McGuire created this Life Tributes page to make it easy to share your memories.

Ask anyone that walked through the parking lots at Northeast...

Send flowers to the McGuire family.