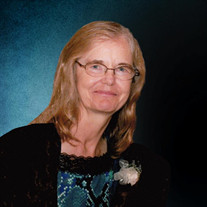 Softly in the morning you heard a gentle call, you took the hand God offered you and quietly left us all.....Elaine Kay Chrispell, 64, of Orwell Twp., Rome, PA passed away on Friday, September 16th, 2016. Elaine was born on December 7, 1951 in Sayre, PA a daughter of the late Robert and Virginia (Rowe) Johnston. For many years, she was employed at Sayre Lingerie ~ it is there she developed her love for sewing and became a professional seamstress. Elaine treasured her family, she especially enjoyed the many shopping trips with them and had the motto “shop till you drop” often times returning several times within the same day to the same stores. Her smile and gentle ways will be missed by her family. Elaine will be greatly missed by her husband of nearly 49 years, Daniel I. Chrispell; her daughters: Deborah (Diana Hall-Chrispell) Chrispell of Rome, Pa; Sherry (John) Winter of Willet, NY; her siblings: Jean (Robert) Griffith of Athens, PA; Carl (Judy) Johnston of Athens, PA; Keith (Marge) Johnston of Sayre, PA; Sue O’Leary of Pringle, PA; David (Brenda) Johnston of Athens; her mother-in-law and father-in-law: Irwin and Lucille Chrispell of Rome, PA; her brothers-in-law and sisters-in-law: Keith Wandell of Sayre, Pa; Rebecca (James) Crown of Rome, PA; Richard Ross; Tim (Janine) Chrispell of Rome, PA; Micah Chrispell of Rome, PA; her special grandchildren: Nathan (Julie) Harrington of Sayre, PA; Aaron (Emily) Harrington of Birdsboro, Pa; Shania Harris of Rome, PA; numerous nieces, nephews and their families also survive. Elaine will be waiting for the resurrection with her parents, infant brother Gary Johnston; a sister Joyce Wandell, brother-in-law Rick O’Leary, a sister-in-law: Debbie (Chrispell) Ross. Family and friends will be gathering on October 8th at 11 am at the Sayre Seventh-day Adventist Church, 4981 Wilawana Rd ., Sayre, Pennsylvania to celebrate and remember her life. Memories and condolences may be shared by visiting our website at www.sutfinfuneralchapel.com Caring assistance is being provided by the Cooley Family of the Sutfin Funeral Chapel, 273 S. Main St., Nichols. Those who wish may kindly consider a memorial contribution to the family, Mr. Daniel Chrispell, 4140 Gulf Road, Rome, PA 18837

Softly in the morning you heard a gentle call, you took the hand God offered you and quietly left us all.....Elaine Kay Chrispell, 64, of Orwell Twp., Rome, PA passed away on Friday, September 16th, 2016. Elaine was born on December 7, 1951... View Obituary & Service Information

The family of Elaine Kay Chrispell created this Life Tributes page to make it easy to share your memories.

Send flowers to the Chrispell family.