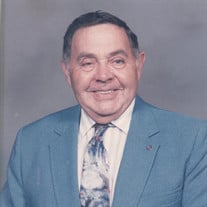 It broke our hearts to lose you, but you didn’t go alone, for part of us went with you the day God called you home….Elwood James Carr, 95, of Potterville, passed away peacefully on Wednesday evening, February 22, 2017 at the Guthrie Towanda Memorial Hospital following a period of declining health. Elwood was born on January 11, 1922 in LeRaysville, Pa a son of John M. and Caroline (Sibley) Carr. Elwood spent his youth in LeRaysville, with his six brothers and sisters. There was always time to be outdoors and Elwood enjoyed spending time playing baseball, softball, hunting and fishing. He attended school until the 10th grade and in 1942 entered into the US Army where he proudly served his country during WWII, rising to the rank of Staff Sergeant. On June 14, 1946 he married Betty Baker and together they raised five children. Over the years, Elwood was employed by Rex Morgan as a mechanic and in 1953 he started to work for Sylvania as a machinist ~ retiring in 1982 following 35 years of service. Memories were made and happy times were shared as a family ~ as the family grew Elwood and Betty welcomed into their lives grandchildren, nieces and nephews. He took great pride in his well-manicured lawn and flower gardens. Months turned into years, and Elwood’s heart was broken on January 26, 1988 when Betty passed away. Elwood was a member of the VFW Post 6824, the First Congregational Church of West Warren. On December 12, 1993, Elwood married Janet (Wetzel) Ford and together they shared twenty-three years and made Potterville their home. A true “Carr” fanatic, Elwood took pride in always having a new car and making sure they were always clean. Until we meet again, may you find comfort in the arms of the angels and be surrounded by our loved ones who had gone before us ~ Those left behind to cherish his memory are his loving wife Janet; his children: Barbara (Pastor Jeffrey) Kistler of New Tripoli, Pa; Wendy Carr of LeRaysville, Pa; Rosalie (Mark) Cook of Rome, Pa; step children: Gavin Ford; Dreck (Dez) Ford; Jared (Stacy) Ford; Nigel (Lisa) Ford. His grandchildren: Stephen Parks, Michael (Heather) Kistler, Matthew (Stephanie) Kistler, Kareem Ragab (Kelsey Herman) , Ramy Ragab (fiancé Nicole Siedhof), Emily (Tad) Soden, Amy (Glenn) Hoyt; Jaime Lyn Carr, Jessica Carr; step grandchildren: Bryan and Adam Ford; Great Grandchildren: Jonathan, Abigail, Jacob, Joseph, Sophia, Elizabeth, Nathaniel, Zachary and Corey. His siblings: Vernon Carr and E. Romeyn (Alice) Carr, sister-in-law: Betty Jane Carr; brother-in-law: Howard (Sylvia) Baker. Many nieces, nephews and their families also survive. Elwood was predeceased by his parents, his first wife Betty, daughter Marilyn Carr Parks; son James Elwood Carr; grandson: Aaron Scott Cook; sisters Doris (Ellis) Coolbaugh, Donna (Gordon) Benjamin; Eulalie (Bob) Hurley; brother Gerald Carr, sister-in-law and brother-in-law: Elinor (Charles) Thompson, Marie (Wayne) Troxell. Family and friends are invited to attend a period of visitation on Sunday, February 26th from 2 -4 pm at the Sutfin Funeral Chapel, 273 S. Main St., Nichols. A funeral service and celebration of his life will be held on Monday, February 27th at 10 am at the First Congregational Church of West Warren with his pastor, Rev. David Pitcher, officiating. Military honors will be accorded by the VFW Post 6824. Interment will be held at the convenience of the family at Bradford County Memorial Park. Those who wish may kindly consider a memorial contribution to the First Congregational Church of West Warren, c/o Mrs. Judy Davenport, 3645 North Rome Rd., Ulster, PA 18850. Memories and condolences may be shared by visiting his guest book at www.sutfinfuneralchapel.com

It broke our hearts to lose you, but you didn&#8217;t go alone, for part of us went with you the day God called you home&#8230;.Elwood James Carr, 95, of Potterville, passed away peacefully on Wednesday evening, February 22, 2017 at the Guthrie... View Obituary & Service Information

The family of Elwood James Carr created this Life Tributes page to make it easy to share your memories.

Send flowers to the Carr family.