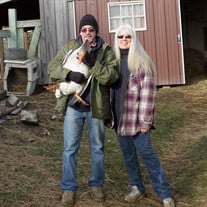 Francis J. Oliver of Rome, PA It broke our heart to lose you, but you didn’t go alone, part of us went with you, the day God called you home….Francis J. Oliver, 69, of Rome, Pa passed away on January 18, 2018 following a sudden illness. Frank, as he was affectionately known by his family and friends was born on May 20, 1948 in Carbondale, Pa a son of the late William and Stasia A. (Tomchick) Oliver. He was a graduate of Vestal High School class of 1966. On October 15, 1986, he married Diana Clark and together they have shared 31 years of marriage. For many years, Frank served the area as a Union Electrician. His greatest love was establishing Gemini Farm with Diana ~ an animal sanctuary for unwanted farm and domestic pets. Frank also enjoyed visiting auctions, yard sales and flea markets ~ although his biggest blessing was being at home with Diana and his many animals. Frank will be greatly missed by his wife Diana; his daughters: Michelle (Lee) Betkowski of Charlotte, NC: AnnMarie (Pete) Sullivan of Raleigh, NC; his brother William “Bill” (Mary) Oliver, Jr.; of Vestal; special grandchildren: McKenna, Wyatt, Anna and Jack; his nieces and their families: Krista (Rob) McIntosh, Marcy (Ken) Buno, Stacie (Joe) Leska; a nephew and his family Bill (Emily) Oliver. He was predeceased by his parents and a sister MaryEllen DeMase. Abiding with his wishes there will be no services. Memories and condolences may be shared by visiting his guestbook at www.sutfinfuneralchapel.com Those who wish may kindly consider a memorial contribution to the Paws & Claws Society, 1017 Grove Ave., Thorofare, NJ 08086 (www.pacsnj.org) in loving memory of Francis “Frank” J. Oliver.

The family of Francis "Frank" J. Oliver created this Life Tributes page to make it easy to share your memories.

It broke our heart to lose you,...

Send flowers to the Oliver family.