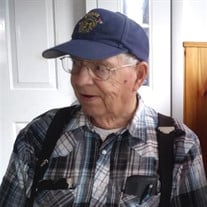 It broke our hearts to lose you, but you didn’t go alone, for part of us went with you the day God called you home…. Frank W. Vandeburg, 86, of Nichols passed away on Thursday, April 25, 2019 at the Robert Packer Hospital, Sayre. Frank was born on April 27, 1932 in Nanticoke, New York a son of the late Earl and Cora (Stowell) Vandeburg. For over sixty-eight years, Frank traveled the country side as a truck driver for Moore Trucking and later D & B Express. Frank was a honorary member of the Greene Fire Department; a member of Teamsters Local #529 of Elmira and #693 of Binghamton. A hardworking and dedicated family man, Frank also enjoyed camping at Pine Cradle. He also treasured his friends and enjoyed visiting with them over a cup of coffee at Gail’s. Frank will be greatly missed by his loving wife of 45 years, Carolyn (Clark) Vandeburg; his children: Mark Vandeburg, David Vandeburg and Frank Vandeburg; his sister Betty Roney. Stepdaughters: Mary (Jon) Twigg; Karen Jerkes, a stepson Kevin Graham. A sisters-in-law Edna Vandeburg. Several grandchildren, great grandchildren, nieces and nephews also survive. Frank was predeceased by his parents Earl and Cora Vandeburg; his sister Lula (Red) Guy; Leona (Carl) Oliver; brothers George (Doris) Vandeburg; Herbert Vandeburg; a daughter-in-law Lois Vandeburg and a stepson-in-law: Michael G. Jerkes. Family and friends are invited to attend a period of visitation on Thursday, May 2, 2019 from 2 – 4 pm at the Sutfin Funeral Chapel, 273 S. Main St., Nichols. A time of remembering the special gift Frank was to all of us will follow at 4 pm. Those who wish may kindly consider a memorial contribution to the Nichols Fire Dept., PO Box 334, Nichols or the Greene Fire Dept. 8 N Canal St, Greene, NY 13778. Memories, condolences or your favorite picture may be shared by visiting his guest book at www.sutfinfuneralchapel.com

It broke our hearts to lose you, but you didn&#8217;t go alone, for part of us went with you the day God called you home&#8230;. Frank W. Vandeburg, 86, of Nichols passed away on Thursday, April 25, 2019 at the Robert Packer Hospital, Sayre.... View Obituary & Service Information

The family of Frank W. Vandeburg created this Life Tributes page to make it easy to share your memories.

Send flowers to the Vandeburg family.