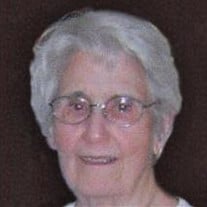 Genevieve R. "Jenny" Brimmer, 90, of Rome, Pa passed away on January 17, 2015 following a brief period of declining health. Jenny was born on July 22 1924 in Terrytown, Pa a daughter of the late George and Jennie (Jones) Hansell. She attended school in Rome and graduated from Rome High School class of 1942. On March 25, 1944, she married Reuben W. Brimmer and together would have celebrated their 71st wedding anniversary this March. Jenny worked at Sylvania in the Navy Department for a year and then went to work at the Rome Post Office in 1948, she retired from the post office in 1979 following 31 years of service. Jenny was a devoted member of the Rome Presbyterian Church where she participated in the church choir, taught Sunday school and enjoyed singing with the community singers for many years. In addition she was a member of the Rome Vigilante Engine Company Auxiliary and served as President for the Woman's Association. She enjoyed camping, traveling and being a homemaker. Jenny had a special love for music, and she taught herself to play the organ later in life. She will be greatly missed by her community and church family. Jenny is survived by her loving and devoted husband Reuben; many nieces, nephews and their families and many special friends. She was predceased by her parents; three brothers Francis, Reid and Robert Hansell; and six sisters: Hazel Hansell, Margaret Wiesner, Helen Hansell, Grace Craigie, Anna Parker and Mary Miller. Family and friends are invited to attend a period of visitation on Wednesday, January 21, 2015 from 12 - 1 pm at the Rome Presbyterian Church. A funeral service and celebration of her life will follow at 1 pm with her pastor, Rev. Karen Ballard, officiating. Interment will follow in the Rome Cemetery. Memories and condolences may be shared by visiting our website at www.sutfinfuneralchapel.com Those who wish may kindly consider a memorial contribution to the Rome Presbyterian Church, PO Box 189, Rome, Pa 18837 or the Genevieve Brimmer Scholarship Fund, c/o Northeast Bradford School, 526 Panther Lane, Rome, Pa 18837 in loving memory of Genevieve R. “Jenny” Brimmer. Caring assistance is being provided by the Cooley Family of the Sutfin Funeral Chapel, 273 S. Main St., Nichols.

Genevieve R. "Jenny" Brimmer, 90, of Rome, Pa passed away on January 17, 2015 following a brief period of declining health. Jenny was born on July 22 1924 in Terrytown, Pa a daughter of the late George and Jennie (Jones) Hansell. She attended... View Obituary & Service Information

The family of Genevieve "Jenny" R. Brimmer created this Life Tributes page to make it easy to share your memories.

Send flowers to the Brimmer family.