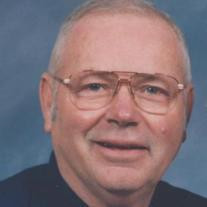 George E. Kinney of Barton, N.Y. passed away unexpectedly on New Year’s Day at his home. George was born on Ross Hill on April 6, 1933, the son of the late Hyman V. (Pat) and Evelyn Emerson Kinney. He was pre-deceased by his parents, his wife of 49 years Julie (Hill) Kinney in 2002, his eldest son Gregory in 1971, a sister and brother-in-law Delores and John Drake of Litchfield, Pa., and a sister-in-law Francine Hill. He is survived by a daughter Mary Lou Kinney and her husband Sean Mongan of Ithaca, N.Y., two sons and daughters-in-law, Douglas and Linda Kinney of Purcellville, Va., Patrick and Patti Kinney of Glastonbury, Ct.; and three grandchildren, Thomas, Nicholas, and Sarah Kinney. He is also survived by his brother and sister-in-law John (Steve) and Kathy Kinney of Pinebluff, NC; a sister and brother-in-law Patricia and Donald Harsh of Hammondsport, NY; a brother-in-law George Hill of Apalachin and a brother- and sister-in-law Gerald Hill and Monica Delta of Lima, Peru, and many nieces and nephews. George attended Owego Free Academy and served 4 years in the U.S. Navy during the Korean Conflict, earning an honorable discharge as a sonarman aboard the destroyer USS Ault. He retired from Conrail in 1994 after 43 years in the Signal Department. George was a devoted family man who enjoyed gardening and landscaping. He was also a lifelong sport fisherman and hunter, and enjoyed woodworking and model airplanes. George was a member of the Smithboro United Methodist Church and the Brotherhood of Railroad Signalmen. Family and friends are invited to attend a period of visitation and time of sharing memories on Friday, January 4th fro 3 -5 pm and on Saturday, January 5th from 10 -11 am at the Sutfin Funeral Chapel, 273 S. Main St., Nichols. Funeral services will follow visitation on Saturday at 11 am at the funeral chapel with Pastor Alan Bill, officiating. Memories and condolences may also be shared by visiting our website at www.sutfinfuneralchapel.com Friends who wish may kindly consider a memorial contribution to the Gregory L. Kinney Memorial Fund c/o Tioga Central School, 5th Ave., Tioga Center, NY 13845 or the Smithboro United Methodist Church, PO Box 89, Smithboro, NY 13840 in loving memory of George E. Kinney.

George E. Kinney of Barton, N.Y. passed away unexpectedly on New Year’s Day at his home. George was born on Ross Hill on April 6, 1933, the son of the late Hyman V. (Pat) and Evelyn Emerson Kinney. He was pre-deceased by his parents, his... View Obituary & Service Information

The family of George E. Kinney created this Life Tributes page to make it easy to share your memories.

George E. Kinney of Barton, N.Y. passed away unexpectedly on...

Send flowers to the Kinney family.