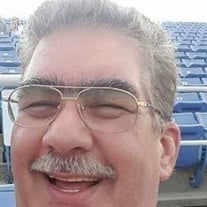 George Sterling Smith, 66, passed away the morning of January 7, 2020 after a challenging battle with Glioblastoma, a rare and aggressive form of brain cancer. He passed away in his home in Barton, New York along-side his loving wife, Dawn Merrill Smith. George was born on July 2, 1953 in Conklin, New York to Frank and Marion Smith. George worked for E.H. Titchener for 30 years and retired from Felchar Manufacturing in 2019. Among many other things, he enjoyed the company of his dear friends and was an avid fisherman. George and his lifelong buddies celebrated this shared interest by taking annual fishing trips to Canada. Shortly before his passing, George married his wife Dawn Merrill Smith on September 14, 2019 at their home in Barton. He is preceded in death by his parents Frank and Marion Smith, as well as his brother Arnold Smith. George is survived by his wife, Dawn; Daughter, Kasey and her husband Julien; Son, Nick and his wife, Jessica; Grandchildren, Emma, Delaynee and Abigail; Step-Son, Cody; Sister-in-Law, Gail; and Nieces, Erin, Kerry, and Jodi. George had a very special support system during his battle with cancer. His kids would like to extend a extra special thank you to his in-laws, Donna and her husband Shaun; Pam and her husband Rich; Linda and her husband Scott; Steve and his wife Penny; Debra and her husband Dennis. George leaves behind a legacy of the most selfless man one could ever meet. He will be remembered through stories of his goofiness, interesting cooking fiascos, as well as his ability to light up the room with a good joke. A celebration of his life will be held on Saturday, January 11th at 6:30 pm at the House of Reardon, 25 Grant Street, Binghamton, NY 13904. Memories, photos and condolences may be shared by visiting his guestbook at www.sutfinfuneralchapel.com Those who wish may kindly consider a memorial contribution to Stray Haven, 179 Shepard Rd., Waverly, NY 14892 in loving memory of George Sterling Smith.

George Sterling Smith, 66, passed away the morning of January 7, 2020 after a challenging battle with Glioblastoma, a rare and aggressive form of brain cancer. He passed away in his home in Barton, New York along-side his loving wife, Dawn Merrill... View Obituary & Service Information

The family of George Sterling Smith created this Life Tributes page to make it easy to share your memories.

George Sterling Smith, 66, passed away the morning of January...