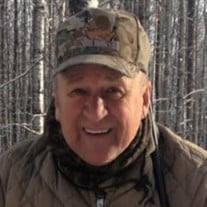 A life well lived is a precious gift, of hope and strength and grace, From someone who has made our world a brighter, better place It&#8217;s filled with moments, sweet and sad with smiles and sometimes tears, With friendships formed and good... View Obituary & Service Information

The family of Gerald "Jerry" G. Corbin created this Life Tributes page to make it easy to share your memories.

Send flowers to the Corbin family.