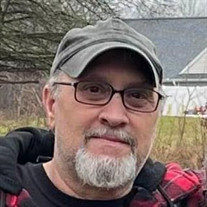 Harold Roger Jewell Jr., 52, of Athens, PA gained his heavenly wings on Saturday March 12, 2022. He will always be remembered for his love of Luke Combs, any old country music, especially Hank Williams Jr., Johnny Cash, and Waylon I’m sure if “Heaven ain’t a lot like Dixie” he wouldn’t have wanted to go. But he was a good ole country boy, We could call him Bocephus, because he was a son of a gun. And he could sing all of those tunes with his amazing voice. He spent Sundays watching NASCAR. Rooting for Kyle Larson, that was his mother’s favorite. They used to call each other during the races. Once she gained her wings, he was sure to let his sisters know the outcome of the races. And always had his best friend, his wife Linda, his “Good Hearted Woman” by his side. (Someone had to try and keep him calm or console him with the outcome of the race) Harold was the jokester of the family. He could crack a joke like no one. And usually at inappropriate times. When you were around him, you were smiling and laughing. He was the one to convince his nieces and nephews (as young children) that Burger King was actually pronounced as Booger King. Or if he was babysitting, he’d convince them all that if we stood outside for hours, screaming into the sky “Mom! Bring us home a pizza!” That she would. And it actually worked. He also blamed farts on those well hidden Barking Spiders that his father before him encountered. No one in the family has ever seen one, but we are convinced they exist. There are so many stories left to tell. All ending in laughter. Harold also enjoyed wood working. He’s made some really amazing stuff over the years. Harold was born on February 21, 1970 in Bath, New York. The youngest of his siblings (and funniest) He was predeceased by his Brother, Roger Ray Jewell in 1983. Father, Harold Roger Jewell, Sr. in 2011 and his Mother, Donna (Sheehan-Jewell) Lead in 2021. Harold is survived by his beloved wife Linda Jewell; and their furbaby Bear. His in-laws Robert and Judy Frederick. Daughter, Tricia Fernandez, and granddaughter Alley. Sisters, Debbie (Jeff) Smith. Cindy (Scott) Butler. Nieces and nephews, Jason, Stacey, Stephanie, Christopher, Jordan, Heather and Scotty. 11 great nieces and nephews, and 2 great great nieces. Along with countless cousins who also grew up with him. We all have a “Tear in our beer” and will “Always be loving you”. It’s our “Family Tradition” to love and miss our Harold, you are our reminder of our “Blues Man” that’s already gone. Abiding with his wishes, services will be held privately. Memories and condolences may be shared by visiting his guestbook at www.sutfinfuneralchapel.com

The family of Harold Roger Jewell created this Life Tributes page to make it easy to share your memories.

Send flowers to the Jewell family.