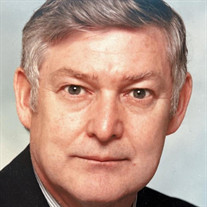 Those Who wish to Watch Harvey's Service: Clickhere Harvey L. Twigg, 88, of West River Road, Nichols, passed away quietly at home on Tuesday afternoon, February 1, 2022. Harvey was born on July 12, 1933 in Hitchcock, South Dakota, a son of the late Bruce and Opal (Rawstern) Twigg. He graduated from Athens high school in 1951, and was a strong member of the Future Farmers of America (FFA) during his high school years. Harvey entered active service the United States Navy on February 6, 1952 and served honorably for four years. During his enlistment, he served on the destroyer USS Willard Keith and received recognition including the Korean Service Medal, the United Nations Service Medal, and the Navy Occupation Medal. Harvey married the former Lois Barrowcliff of Sayre, PA, on July 25, 1954. They remained married until her death in 2013, an impressive stretch of 59 years. He was an active member of the Nichols United Methodist Church for more than 50 years, serving as a Trustee, on the Administrative Board, the Pastor Parish Relations Committee, the Finance Committee, and the Lay Leadership Committee. Harvey was employed with IBM for more than 30 years, mainly at the Owego and Endicott locations, and was recognized in 1984 by NASA for his work on the Space Shuttle. He was also an active member of the Westbrook Masonic Lodge for nearly 40 years, culminating with the Dedicated Service Award in 2008. As a Mason, he served the lodge as Master 3 times, Senior and Junior Warden 3 times, Senior Deacon 6 times, and all of the other lodge chairs at least once. Harvey served two terms on the Nichols Town Board from January 1980 to December 1987, and was active in the Asbury society for many years. He enjoyed spending time with his family, tending his small farm, and baseball. He is survived by his children: Kenn and Barb Twigg of Litchfield, Rick and Beth Twigg of Navarre, FL, and Lisa and Paul Cruz of San Antonio, TX; his grandchildren: Shannon, Jason, Casey, Austin, Caleb and Courtney; and his great grandchildren: Jarrod, Kylea and RJ. He is also survived his siblings: Alan, Jesse, Cecil, Dan and Nancy. He is predeceased by siblings: Wilbur, Marilyn, and Larry. Family and friends are invited to attend a period of visitation on Wednesday, February 9th from 3 – 5 pm at the Sutfin Funeral Chapel, 273 S. Main St., Nichols. A celebration of his life will follow at 5 pm. Those unable to attend may watch the live stream at: [Clickhere] https://my.gather.app/remember/harvey-twigg Harvey will be laid to rest in the spring in the Nichols Cemetery. Memories and condolences may be shared by visiting his guestbook at www.sutfinfuneralchapel.com Those who wish may kindly consider a memorial contribution to the Nichols Cemetery, c/o Town of Nichols, PO Box 359, Nichols NY 13812 in loving memory of Harvey L. Twigg.

The family of Harvey L. Twigg created this Life Tributes page to make it easy to share your memories.

Those Who wish to Watch Harvey&#39;s Service:
Clickhere

Send flowers to the Twigg family.