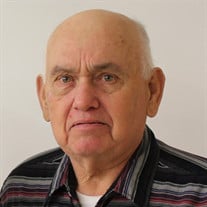 No farewell words were spoken, no time to say goodbye, you were gone before we knew it and only God knows why….Howard Thomas “Tom” Rought, 73, of North Orwell, Pa passed away suddenly and unexpectedly on Saturday, July 28, 2018. Tom, as he was affectionately known by his family and friends was born on January 2, 1945 in Waverly, NY. He was a graduate of Tioga Central High School Class of 1963 where he lettered in football, baseball, basketball and track. A hardworking and dedicated man, Tom was employed following high school at Harris Foodlines. He later was employed at Endicott Johnson and Agway. Always wanting to provide the best for his family, Tom would often work two jobs ~ whether it was hauling hay or sawdust and would often barter along the way; sometimes coming home with a calf, a lamb, or a dog. For many years, he was employed at Robert Packer Hospital in the Environmental Services and Northeast Bradford School District where he served as a custodian. Although his greatest love was being his own boss and owning Stompin’ Tom’s Pallets. Tom was an avid San Francisco Giants Fan, enjoyed the Green Bay Packers and watching Syracuse Basketball. A passionate bowler, Tom bowled in Towanda, Owego and Waverly and had bowled two 300 games! His greatest pleasure was being surrounded by his family and attending races with them. It broke our hearts to lose you, but you didn’t go alone for part of us went with you the day God called you home. Tom will be greatly missed by his wife Cathy; his children: Howard Thomas “Jake” Rought, Jr. and his wife Lisa; Todd and his wife Donnette Rought; Tamara and her husband John Beckwith; his grandchildren: Andrew (Brittany) Rought, Bryan (Lindsey) Rought, Kyla Beckwith, Thomas Rought, Ashlynn Beckwith, Victoria Rought; his great grandchildren: Christopher and soon to arrive Henry. His brother and sister-in-law: Theodore "Ted" and Ilona Rought; brother-in-law and sister-in-law Albert and Betty Moore; a sister-in-law: Shirley Snyder; numerous nieces, nephews, cousins and his canine companions Riley and Chin. Tom was predeceased by his father Howard Rought; his maternal grandmother Maxine Olmstead; aunt and uncle Aubrey and Margaret Nichols, father-in-law and mother-in-law Lloyd and Ruth Moore and brother-in-law William Snyder, Sr. Family and friends are invited to attend a period of visitation on Thursday, August 2nd from 4 to 8 pm at the Sutfin Funeral Chapel, 273 S. Main St., Nichols and on Friday, August 3rd from 10 to 11 am at the chapel. A funeral service and celebration of his life will follow at 11 am. Flowers will be provided by the family and they ask that memorial contributions be directed to the North Orwell Hall in care of Olney Bullock 1342 Lovett Hill Rd, Rome PA 18837 or Stray Haven, 194 Shepard Road, Waverly, NY 14892 in loving memory of Tom. Memories, condolences or your favorite picture of Tom may be shared by visiting his guest book at www.sutfinfuneralchapel.com

No farewell words were spoken, no time to say goodbye, you were gone before we knew it and only God knows why&#8230;.Howard Thomas &#8220;Tom&#8221; Rought, 73, of North Orwell, Pa passed away suddenly and unexpectedly on Saturday, July 28,... View Obituary & Service Information

The family of Howard Thomas Rought Sr created this Life Tributes page to make it easy to share your memories.

Send flowers to the Rought family.