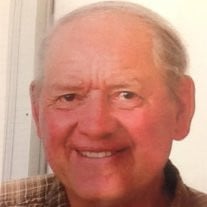 A new arrival in the presence of his Lord and Savior, Howard ”Hoppy” Blair Keir, 75 of Ulster passed from Melanoma cancer leaving behind his loving wife of 40 years, Connie Mills Keir and their 4 children. He went quietly at home on Friday, November 22, 2013. Howard was born May 3, 1938 on the family farm in Trinket to Adam Blair “Hap“ and Daisy Larcom Keir. Howard graduated from Athens High School in 1956 where he served as senior class president. He married Connie Mills Keir on June 16, 1973 then took over operation of the family farm in 1974. For 30 years, he was a Rural Letter Carrier with the U.S. Post Office. Howard loved his sports; specifically Penn State football, baseball, and NASCAR racing.; as well as Allis-Chalmers tractors. He was also an avid hat collector. He always exhibited great affection for his “girls”, the cows. Howard was a lifetime member and master of the PA Grange and the Wysauking/Sheshequin Grange #58. He was a director of the Bradford-Sullivan County PA Farm Bureau. Howard was also an active member of the Windham Summit Bible Church and the Trinket Community Organization. Howard was preceded in death by his father, Adam Blair on April 24, 1976 and his mother, Daisy Larcom on March 24, 1985. His only sister, MariLou passed on February 24, 1996. He will be dearly missed by his 4 children: Jason Blair (Kimberly) Keir of Clinton, MS; Joshua Thomas Keir of Colonial Beach, VA; Kristy Lou Keir of Ulster, PA; and Kimberly Sue Keir (James) Damian of Timonium, MD and dearly loved 2 grandchildren, Gavin Blair and Kyla Anne of Clinton, MS. He is also survived by his Father-in-law and Mother-in-Law, Silas and Esther Mills, Sr. and close cousins, James and Jean Carleton of Wellsboro, PA and Mary Lou Keir of Sayre, PA. Family, friends, neighbors, and classmates are invited to share their loving memories of Howard at a memorial service to be held on Wednesday, November 27, 2013 at 11:00 a.m. at the Windham Summit Bible Church. In lieu of flowers, please send donations to the Windham Summit Bible Church at 7544 Battle Creek Road, Rome, PA 18837 in memory of Howard Keir. Memories and condolences may be shared by visiting our website at www.sutfinfuneralchapel.com Caring assistance is being provided by the Cooley Family of the Sutfin Funeral Chapel, 273 S. Main St., Nichols.

A new arrival in the presence of his Lord and Savior, Howard &#8221;Hoppy&#8221; Blair Keir, 75 of Ulster passed from Melanoma cancer leaving behind his loving wife of 40 years, Connie Mills Keir and their 4 children. He went quietly at home... View Obituary & Service Information

The family of Howard "Hoppy" Blair Keir created this Life Tributes page to make it easy to share your memories.

A new arrival in the presence of his Lord and Savior, Howard...

Send flowers to the Keir family.