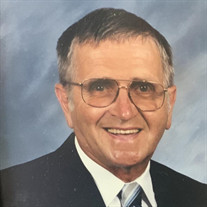 When someone you love becomes a memory… the memory becomes a treasure ~ Jack L. Rogers, 85, of Litchfield, Pa passed away on Tuesday, July 6, 2021 at the Sayre Personal Care Home and is now dancing in heaven with his loving wife Barbara. Jack was born on a warm summer day, May 28, 1936 in Sayre, Pa a son of the late Stanley and Genevieve (Kinner) Rogers. He attended school in Athens and quickly fell in love with a gal from Sayre High School named Barbara Jean. Jack and Barbara were married on June 9, 1955 at the Litchfield United Methodist Church. His heart was broken on their anniversary, June 9th 2019 when she went home to be with her Lord. Jack was a long-time employee of the Ingersoll Rand Foundry and for eighteen years served as a courier for the Guthrie Clinic. Jack enjoyed country living and loved to spend time hunting, fishing at Satterley Creek and always had a well-planned garden. He also was a NY Giants fan! When asked what his is favorite past time was… it was always good meal ~ after all Barbara always made sure there was a homecooked meal to include her special macaroni salad! Jack will be greatly missed by his sons and daughter-in-law’s, John Wesley and Ruth Ann (Hubbard/McDonald) Rogers of Naples Florida and Shawn Laverne and Kimberly Ann (Merrill) Rogers of Chazy, New York. Brother and sister-in-law: Ed and Jean Rogers of Merritt Island, Florida; Sister Rosie Ackley of Sayre, Pennsylvania; His sisters-in-law: Janice Jones of Waverly, New York and Nancy Depue of Gainesville, Florida. Sisters-in-law: Marjorie (Schill) Rogers of Columbia Crossroads, Pennsylvania. His four grandchildren, Jennifer (Rogers) Rad and her Husband Michael of King of Prussia Pennsylvania, Steven Rogers of Sarasota, Florida, Nolan Rogers of Smithfield, Rhode Island and Spencer Rogers of Plattsburg, NY. Two great grandchildren Sean and Aralyn Rad of King of Prussia, Pennsylvania. Several nieces, nephew and their families also survive. A favorite neighbor Jack Pond of Litchfield Pennsylvania who was often referred to as “my third son”. He was predeceased by his parents; a brother Wayne Rogers, brothers-in-laws Walter Ackley, Jerry Depue, Harry Jones, Sam Northrup, Robert Warner, Ray Raupers; sister-in-law Audrey Warner. Family and friends are invited to attend a period of visitation on Saturday, July 10th from 11 to 12 pm at the Litchfield United Methodist Church. A celebration of his life will follow at 12 pm. Jack will be laid to rest in the Nichols Cemetery. Memories and condolences may be shared by visiting his guest book at www.sutfinfuneralchapel.com Those who wish may kindly consider a memorial contribution to the Litchfield United Methodist Church, c/o Brett Rogers, 2759 Litchfield Rd., Sayre, Pa in loving memory of Jack L. Rogers. Caring assistance is being provided by the Sutfin Funeral Chapel, 273 S. Main St., Nichols.

When someone you love becomes a memory&#8230; the memory becomes a treasure ~ Jack L. Rogers, 85, of Litchfield, Pa passed away on Tuesday, July 6, 2021 at the Sayre Personal Care Home and is now dancing in heaven with his loving wife Barbara. Jack... View Obituary & Service Information

The family of Jack L. Rogers created this Life Tributes page to make it easy to share your memories.

When someone you love becomes a memory… the memory becomes a...