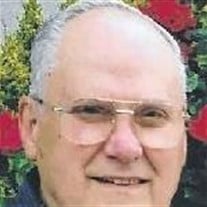 James R. Honnick, 84 of Guilderland, New York went to rest in the arms of Jesus with his loving family by his side on January 27, 2019. He was a graduate of Nichols High School in 1952. He enjoyed many sports and was the captain of his baseball and basketball teams. He served in the U.S. Navy as a Radio Operator for three years and continued in the Reserves for another six years when he was honorably discharged. His employment included Vail-Ballou Press in Binghamton, Clarity Press in Albany, Williams Press in Albany and he retired from the Times Union Newspaper in Albany. He was a charter member of the Guilderland Elks 2480. Jim loved the quiet outdoors and enjoyed fishing, hunting and trapping. He was born on October 12, 1934 in Endicott, N.Y. He was the son of Helen Honnick Kellogg and Michael Honnick. Jim is survived by his loving wife, Roberta, of 61 years; his daughter, Karen McCloskey (Kevin) and his two grandsons Alex McCloskey and Brad McCloskey; his son Kevin Honnick (Leslie) and two grandsons Keith Honnick and Travis Honnick. He is also survived by his brother Raymond Honnick (Lynda); his sister Johanna Olsher; and was predeceased by his brother Norman Willis (Jackie). He is also survived by sisters-in-law, Dolores Martin (Doug), Carol Clark (Sam) and Louise Beville (George) and many nieces and nephews. Jim will be dearly missed by all until we meet again. We are comforted in the reassurance of the Lord's promise of salvation. He was a member of Christ's Church in Guilderland. Jim was a donor of the Anatomical Gift Program at the Albany Medical College. His wishes were to help others in need and to help them to lead a fuller life. Family and friends are invited to attend a period of visitation on Saturday, May 11, 2019 from 12 to 1 pm at the Sutfin Funeral Chapel, 273 S. Main St., Nichols. A memorial services will follow at 1 pm with his nephew, Pastor Dan Martin, officiating. Memories, condolences and photos may be shared by visiting his guest book at www.sutfinfuneralchapel.com

James R. Honnick, 84 of Guilderland, New York went to rest in the arms of Jesus with his loving family by his side on January 27, 2019. He was a graduate of Nichols High School in 1952. He enjoyed many sports and was the captain of his baseball... View Obituary & Service Information

The family of James R. Honnick created this Life Tributes page to make it easy to share your memories.

Send flowers to the Honnick family.