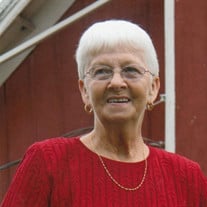 A mother holds her child’s hand for a little while and their hearts forever…..Our hearts were saddened on Wednesday, January 31, 2018 with the sudden passing of our loving mother, nana, sister, aunt and friend Jane Wilmot Upham, 78, of LeRaysville, Pa. Jane was born on April 14, 1939 in Towanda, Pa a daughter of the late Newell B. “N.B.” and Ethel (Wilbur) Wilmot. She was a graduate of Northeast Bradford High School class of 1957. She received her BS in Health and Physical Education from East Stroudsburg University. On June 4, 1960, Jane married John Richard Upham and together they celebrated 51 years of marriage until his passing on July 28, 2011. Together Jane and John Richard owned and operated the family dairy farm in Neath. Jane took great satisfaction in tending to her beautiful flower and vegetable gardens, canning, and was a wonderful cook and baker. A loving and devoted mother and nana ~ she treasured the time spent with family and always looked forward to her grandchildren’s accomplishments. Jane was a member of the Neath Welsh Congregational Church where she assisted the Neath Ladies Aid and Vacation Bible School. A strong believer in education, Jane served for over forty years on Northeast Bradford Student Loan Board. As Jane’s health declined, she was assisted at home by her dear friends Arlyn and Arlene Wilbur and later moved to Brookdale Vestal West. There she made friends with the staff and residents. We would like to thank Arlyn and Arlene and the caregivers at Brookdale for the love and care they gave to our mom. Jane will be deeply missed by her children: Janet and Bret Platt of Culpeper, Va; Rebecca and Conrad Carlsen of Rome, Pa; Richard E. and Lisa Upham of LeRaysville, Pa; Abigail R. and William Jones, III of Friendsville, Pa; her sister Stella Walker of Lewisburg, Pa; sisters-in-law and brothers-in-law: Katherine Brown of Towanda, Pa; Anne and John Dean of LeRaysville, Pa; her special grandchildren: Devin, Karina (and fiancé Matt Boozer), Dylan and Logan Platt; Kristin (Tom) Shores, Tory (Amy) Carlsen, and Kelsey (Stephen) Peterson; Bryce Upham, Kent (Nikki) Upham, Levi Upham; Luke (Susanne) Jones, Kenzie, Keri, Peyton, Krista, and Kendel Jones; her great grandchildren: Lexi and Riley Shores, Addie Peterson. Several nieces, nephews and their families also survive. Jane was welcomed into heaven by her parents Newell B. “N.B.” and Ethel Wilmot and was longing to be reunited with her beloved husband John Richard. Family and friends are invited to attend a period of visitation on Saturday, February 3rd from 12 – 2 pm at the Neath Welsh Congregational Church. A funeral service and celebration of Jane’s life will follow at 2 pm with Pastor Larry Jennings, officiating. Interment and prayers of committal will follow in the Neath Cemetery. Memories and condolences may be shared by visiting Janes’ guest book at www.sutfinfuneralchapel.com Those who wish may kindly consider a memorial contribution to the Neath Welsh Congregational Church, c/o Alan Crawn, 9043 Rte 467, LeRaysville, Pa 18829 or the Northeast Bradford High School Attn: Northeast Bradford Student Loan Fund, 526 Panther Lane, Rome, PA 18837 in loving memory of Jane Wilmot Upham. Caring services are being provided by the Cooley Family of Sutfin Funeral Chapel, 273 S. Main St., Nichols.

A mother holds her child&#8217;s hand for a little while and their hearts forever&#8230;..Our hearts were saddened on Wednesday, January 31, 2018 with the sudden passing of our loving mother, nana, sister, aunt and friend Jane Wilmot Upham,... View Obituary & Service Information

The family of Jane Wilmot Upham created this Life Tributes page to make it easy to share your memories.

A mother holds her child’s hand for a little while and their...

Send flowers to the Upham family.