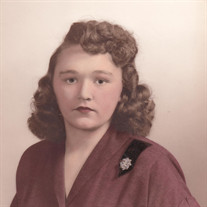 A mother holds their children’s hands for a little while and their hearts forever…. Janet H. Davis, 82, of Nichols passed away on Saturday morning, August 4, 2018 at Lourdes Hospital following a period of declining health. Janet was born on February 3, 1936 in Campville, NY a daughter of the late Paul and Ruth (Reeves) Rouse. She was a graduate of Owego Free Academy and for many years was home health aide. In addition, Janet also was a secretary for the Waverly Water Department. She was a member of the Talmadge Hill Gospel Chapel, enjoyed reading her Bible, visiting with family, friends and was an avid bird watcher. Janet also enjoyed the challenge of playing video games with her grandchildren. Janet will be greatly missed by her daughters and sons-in-law: Donna and Arthur Wasielewski of Barton; Lydia and Thomas Smith of Nichols; Becky Blake-Brown of Binghamton; her special grandchildren: Paul Hunter, Kira (LeVar) Blake-McRae, Ron Blake, Christian Smith, Chad (Roxanne) Wasielewski, April (Shawn) Santulli; ten great grandchildren; many nieces, nephews and their families also survive. Janet was predeceased by her beloved son Paul LaVern Davis; siblings: Richard “Dick” Rouse, Eugene “Stuff” Rouse, Shirley Gwyther, Beverly Pettis, Barbara Springer and a nephew Gene Rouse. Family and friends are invited to attend a period of visitation on Monday, August 13, 2018 from 11 to 12 pm at the Talmadge Hill Gospel Chapel, Talmadge Hill Road South, Waverly, NY A memorial service and celebration of her life will follow at 12 pm with Pastor Frank Wasielewski, Jr., officiating. Janet was laid to rest next to her son, Paul in the Smithboro Cemetery. Memories and condolences may be shared by visiting her guest book at www.sutfinfuneralchapel.com Those who wish may kindly consider a memorial contribution to the National Audubon Society, 159 Sapsucker Woods Rd, Ithaca, NY 14850 or the Talmadge Hill Gospel Chapel, 1645 County Route 60, Lowman, NY 14861 in loving memory of Janet H. Davis.

A mother holds their children&#8217;s hands for a little while and their hearts forever&#8230;. Janet H. Davis, 82, of Nichols passed away on Saturday morning, August 4, 2018 at Lourdes Hospital following a period of declining health.... View Obituary & Service Information

The family of Janet H. Davis created this Life Tributes page to make it easy to share your memories.

A mother holds their children’s hands for a little while and...