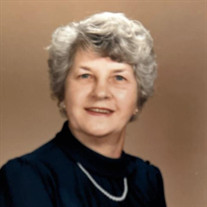 A mother holds her children's hands for a little while and their hearts forever..... Jeanie Mae (Strope) Smith, 96, of Church Street, Smithboro, NY went home to be with her Lord on Friday evening, February 4, 2022. Jeanie was born on March 31, 1925 in Ashland, NY a daughter of the late Edward and Mildred (Barr) Strope. She was a graduate of Owego Free Academy High School Class of 1943. On June 24, 1944, she married Frank Smith and together they made Smithboro their home. Jeanie was a retired employee of the Tioga Central School where she worked in the cafeteria. Jeanie was a devoted member of the Smithboro United Methodist Church where she participated as the worship chairman, served as Communion Steward, Secretary of the United Methodist Women and was a member of the church choir. Jeanie was an active member of her community, she enjoyed participating with the Tioga Center, Barton and the Gold Age Senior’s in Owego. Jeanie was an avid reader and also enjoyed crafts, puzzles, line dancing and traveling. In addition, she also served as an election inspector and was a member of the Sweet Violet’s Red Hats Club. Jeanie is survived by her sons and daughters-in-law: Frank and Linda Smith; Bernard and Debbie Smith and Edward and Kelly Smith. Her grandchildren: Shelly (Randy) Simmons, Michael (Lisa) Horton, Michelle Cross, Tara (Brian) Sotolongo, Andrew (Stephanie) Smith, Jonathon Lattari, Brian Hill, Joy Hill, Angela (Kris) Engelbert; nineteen great grandchildren. Her sister Phyllis Drew; several nieces, nephews and their families also survive. Jeanie was predeceased by her parents; her husband Frank Smith; daughters Vickie Smith; Vivian (Doug) Horton; a grandson Phelan Hill; her siblings: Eugene (Dora) Strope; Ernest (Betty) Strope, Gladys Ketchum. Family and friends are invited to attend a period of visitation on Monday, February 14th from 10 – 11 am at the Smithboro United Methodist Church. A celebration of her life will follow at 11 am. Jeanie will be laid to rest in the Smithboro Cemetery. Memories and condolences may be shared by visiting her guest book at www.sutfinfuneralchapel.com Those who wish may kindly consider a memorial contribution to the Tioga Center EMS, PO B0x 185, Tioga Center, NY 13845 or the Smithboro United Methodist Church, PO Box 37, Nichols, NY 13812 in loving memory of Jeanie M. Smith.

A mother holds her children's hands for a little while and their hearts forever..... Jeanie Mae (Strope) Smith, 96, of Church Street, Smithboro, NY went home to be with her Lord on Friday evening, February 4, 2022. Jeanie was born on March... View Obituary & Service Information

The family of Jeanie M. Smith created this Life Tributes page to make it easy to share your memories.

A mother holds her children&#39;s hands for a little while and their...