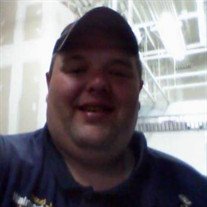 No farewell words were spoken, no time to say goodbye, you were gone before we knew it and only God knows why….. Our hearts were broken on Monday, February 5th 2018 with the sudden passing of Jeffrey James Wheeler, 37, of Windham Twp., Rome, Pa. Jeff was born on June 3, 1980 in Sayre Pa a son of Peggy (Harford) and the late Frank James Wheeler. He was a graduate of Northeast Bradford High School and was currently employed at the Sayre Walmart ~ where he could be found carrying a smile and a waving a friendly wave. On July 15, 2000 Jeff married Theresa Renee Kipp and together they have shared nearly 18 years of marriage. Devoted to his family, Jeff treasured the time spent with them. He also loved tending to his chickens, his garden and spending time with his grandson, Zayden. Jeff will be greatly missed by his wife Theresa; his sons: Kevin Wheeler, David Johnson and Camden Skaggs. His mother and step father: Peggy and James Waldorf of Wyalusing, Pa; his sister and brother-in-law: AnnRae and William Travis of Wyalusing, Pa. his grandson Zayden; several aunts and uncles among them Great Aunt Carol Harford; nieces and nephews: Faith Rae, Grace, Jacob, Allen, David, Vanessa, Jessica, Robert, Doyle and Brian. Many cousins among them Joyce Rogers. Theresa’s extended family ~ sisters-in-law and brothers-in-law: Carla and Bobby Benedict, Jennifer Kipp, Becky and Dan Randall. His best friend Brent Ludwig; and close friends: Dale Shepard, Mike Theim and Jim Flannigan. Jeff was welcomed into heaven by his father Frank James Wheeler; his grandparents: Irene Reeve, Paul Harford, Hilda Wheeler and Frank T. Wheeler; his aunt and uncle Linda Drew and Duane Ellis. Family and friends are invited to attend a period of visitation on Friday, February 9th from 2 – 4 pm at the Sutfin Funeral Chapel, 273 S. Main St., Nichols. A funeral service and celebration of his life will follow at 4 pm at the chapel. Memories and condolences may be shared by visiting his guest book at www.sutfinfuneralchapel.com Those who wish may kindly consider a memorial contribution to the family, Theresa Wheeler, 38662 Route 187, Rome, Pa 18837 in loving memory of Jeffrey James Wheeler.

No farewell words were spoken, no time to say goodbye, you were gone before we knew it and only God knows why&#8230;.. Our hearts were broken on Monday, February 5th 2018 with the sudden passing of Jeffrey James Wheeler, 37, of Windham Twp.,... View Obituary & Service Information

The family of Jeffrey James Wheeler created this Life Tributes page to make it easy to share your memories.

Send flowers to the Wheeler family.