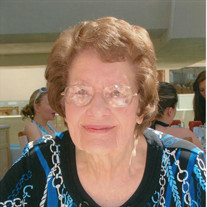 Jo Anne "Jody" Bosler, 98 Jo Anne "Jody" Bosler, 98, of Orwell Twp., (Rome, PA) passed away on Thursday evening, August 10, 2017. Born Victory Anne Powell on November 11, 1918, in Orchard, CO, Jody was named in celebration of the end of World War I. Nicknamed "Jo," she later officially changed her name to Jo Anne, but everyone called her Jody. As a kid, Jody spent much of her time riding her beloved horse, Beauty. She attended school in a one-room schoolhouse and later went on to graduate from Weldon High School in 1936. She pursued teaching at Colorado State University for one year before leaving to join the workforce. Jody took a job at Remington Arms in Colorado Springs, working in the primer department for 50 caliber machine guns. She then moved to Seattle, Washington to work for Boeing Aircraft Corporation where she installed oxygen lines in B-29 bombers. It is said that her shift may have produced the Enola Gay. While in Washington, she met a handsome sailor, Robert W. Bosler, who was stationed with the United States Navy in Belview. She followed him back east to New Jersey, where she attended Rutgers University to study poultry. Robert and Jody married on March 11, 1946. They ventured to central Pennsylvania in 1948 and found a beautiful farm nestled in the Endless Mountains, where they lived with the previous owners to learn the art of farming before taking over full-time. In addition to farming, Jody worked at a number of places over the years, including Mayfair Nurseries, Owego Heat Treat, and GTE Sylvania. She was the Orwell Township tax collector for six years. Jody was always willing to volunteer her time and was active in the community as a 4-H leader, BoyScouts leader, president of the Potterville Ladies Aid, and volunteer with the Darling Cemetery Association. Jody loved horses, her Native American heritage, the color red, and a good joke. She was environmentally conscious and a preservationist. She always helped those in need and cared for the less fortunate. She put family first, and adored her grandkids and great granddaughter, Estelle. Jody was predeceased by siblings, Ronald Harold "Skinner," Audrey Minnie "Midge," William Walter "Bill," Wilfred Ross "Ross," Thomas Edward "Tom," Iris Eloise "Doll," Lois Mae, and Herbert Joseph "Pink," an infant brother and sister, as well as a son, Carl Jay, and husband, Robert Wagner Bosler. Jody will be greatly missed by her son: Robert Ross Bosler; her granddaughters: Brandy and her husband Jason Kift; Abigail and her husband Justin Brown; great granddaughter Estelle Kift. Many nieces and nephews among them: George G. and Nancy Bosler; Lisa Bosler, Richard Puckett, Linda Burgat, Ross Powell, Betty Marshall; great niece Melanie Miller; many wonderful friends whom she considered her family, Family and friends are invited to attend a period of visitation and time of sharing memories on Tuesday, August 15th from 10 to 12 pm at the Sutfin Funeral Chapel, 273 S. Main St., Nichols. A funeral services and celebration of a life well lived for Jody will follow at 12 pm with Pastor Richard Vieldhouse officiating. Interment will follow in the Darling Cemetery. Memories and condolences may be shared by visiting her guest book at www.sutfinfuneralchapel.com Those who wish may kindly consider a memorial contribution to the Equines For Freedom, PO Box 53, Factoryville, PA 18419 (equinesforfreedom.org)

The family of Jo Anne "Jody" Bosler created this Life Tributes page to make it easy to share your memories.

Send flowers to the Bosler family.