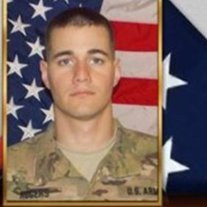 When someone you love becomes a memory….the memory becomes a treasure ~ our hearts were broken Friday, June 28, 2013 with the sudden passing of our hero Sgt. Justin Richard Rogers, 25, of Barton, NY. He will be greatly missed by his parents: Stanley “Stosh” and Teresa Vicki of Barton; his wife Stefanie (Ramsey) Rogers; his daughter Nateli Rogers; siblings: Amber Rogers and Ryan Vicki. Maternal Grandparents: Richard and Carol Rogers; Paternal Grandmother Doris Vicki; Aunts and Uncles: Rick and Angie Rogers, Julie and Mark Whipple, Pat and Greg Jeffers, Tom Hollister, Susan Vicki; his nephews: Ty Walger and Dylan Vincent; cousins: Adam Rogers and his daughter Alexandria Creller; Emily, Amy and Mark Whipple; Kristen Lewis and Heather Dunning. Justin was predeceased by his Paternal Grandfather Stan Vicki; Maternal Great Grandmother Irene Rogers. Justin was born on May 26, 1988 in Sayre, PA the son of Stanley and Teresa Vicki. “Jutt” as he will be remembered by his schoolmates ~was a graduate of Tioga Central High School Class of 2007. During his school years, he actively participated in wrestling and football. He enjoyed weightlifting and spending time at the gym. Sgt. Justin proudly served his country for the last five years with the US Army and was currently serving in Afghanistan as a horizontal construction engineer. His awards include two Army Achievement Medals, an Army Good Conduct Medal, a National Defense Service Medal, an Afghanistan Campaign Medal with Campaign Star, a Global War on Terrorism Service Medal and Army Service Ribbon. Justin treasured his daughter Nateli and was so looking forward to having leave to be able to spend time with her. He loved and lived life to the fullest ~ he enjoyed spending time with his family, friends and was the “life of the party”. Our hearts still ache in sadness and secret tears still flow, what it meant to lose you, no one will ever know. A memorial service and a celebration of Justin’s life will be held on Thursday, July 11th at 6 pm at the Tioga Central Middle School Auditorium, 5th Ave., Tioga Center, NY with Pastor Jon Austin of the Lounsberry United Methodist Church, officiating. Interment with full military honors will be held at Arlington National Cemetery. Memories and condolences may be shared by visiting our website at www.sutfinfuneralchapel.com Those who wish may kindly consider a memorial contribution to The Justin Rogers Athletic Sports Scholarship, c/o Tioga Central School, PO Box 241, Tioga Center, NY 13845 in loving memory of Sgt. Justin Richard Rogers. Caring assistance is being provided by The Cooley Family of the Sutfin Funeral Chapel, 273 S. Main St., Nichols

When someone you love becomes a memory&#8230;.the memory becomes a treasure ~ our hearts were broken Friday, June 28, 2013 with the sudden passing of our hero Sgt. Justin Richard Rogers, 25, of Barton, NY. He will be greatly missed by his parents:... View Obituary & Service Information

The family of Sgt. Justin Richard Rogers created this Life Tributes page to make it easy to share your memories.

When someone you love becomes a memory….the memory becomes a...