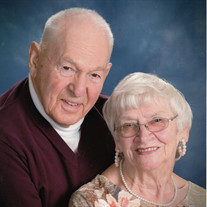 Softly in the morning, you heard a gentle call, you took the hand God offered you and quietly left us all….Kent E. Edsell, 85, of Windham, PA passed away peacefully on Thursday morning, January 26, 2017 at the Robert Packer Hospital following a brief period of declining health. Kent was born on October 22, 1931 in Potterville, PA a son of the late Leo and Bernice (Manchester) Edsell. He was a graduate of LeRaysville High School class of 1950 where he played basketball and baseball. On April 4, 1952 he entered into the US Marines and proudly served his country during the Korean War. On August 18, 1956 he married Catherine Riley and together they have shared sixty years of marriage. Kent was a lifetime member of the VFW Post 6824 of Potterville, PA where he served as Past Commander. He was an avid baseball player and shared his love of baseball by giving each of his grandchildren and great grandchildren a baseball. A true New York Yankee fan, Kent enjoyed watching them play and would jokingly kid around with the Boston Fans. He loved to go hunting and occasionally fished with his family. He also enjoyed family card playing nights, a game of horseshoes and in later years farkle. Although his greatest pleasure was being surrounded by his family and spending time at Haighs Pond. Kent will be greatly missed by his wife of 60 years Catherine Edsell; his children and their spouses: Larry and Ernistine “Tina” Edsell of Rome, PA; Barbara Jayne of Tunkhannock, PA; Kevin Edsell of Rome, PA; Andrew and Teresa Edsell of Rome, PA; Theresa and Edward Krymowski of Binghamton, NY; Joel and Kelly Edsell of Rome, PA; his grandchildren: PJ and Kristi Burroughs, Tabby and Josh Decker, Emily Edsell; Brian and Stacey Jayne, Stacie Jayne; Chandra Jayne, Brandon and Kim Edsell, Brittany and Andrew Rought, Kent Krymowski, Kyle Krymowski, Morgan and Matthew Lawrence, Drew Edsell and Kamryn Edsell; his great grandchildren: Michael and Ivy Jayne, Cheyanne Jayne, Aubree Bartholomew, Irys and Alethea Burrows, Shantilly and Isabel Decker; Nolan and Irisa Edsell and Dason Lawrence; his sister-in-law: Joan Edsell of Herrickville, PA; sister-in-law Mary Riley of CA; Patricia Hutchinson of Cadis, Pa; brother-in-law: John “Jack” Riley of Endicott, NY; Michael Riley of Binghamton, NY; sisters-in-law and brothers-in-law: Dorothy and Barry Angel of Triangle, NY; Tom and June Riley of VA; Barbara and Daniel Boland of SC; Ann and Terry Silvernail of Endicott, NY; Jane and Keith Nichols of Owego, NY; numerous nieces, nephews and their families also survive. Kent was welcomed into heaven by his parents Leo and Bernice Edsell; his siblings: Alice (Claude) Moore, Bernice “Leola” (Charles) Cafferty, Marjorie (Lloyd) Hicks, Boyd “Bus” (Mildred) Edsell; Andrew Bryce (Stella) (Marletta) Edsell; Moyle Edsell; his son-in-law: Alvin Jayne; grandson Joey Jayne; his mother-in-law and father-in-law: Catherine & Vincent Riley; sisters-in-law and brothers-in-law: Agnes and James Neville, Joe and Betty Riley, Roy Hutchinson; Joan Riley. Family and friends are invited to attend a period of visitation on Tuesday, January 31, 2017 from 4-7 pm at the Sutfin Funeral Chapel, 273 S. Main St., Nichols. A funeral service and celebration of his life will be held on Wednesday, February 1st at 11 am at the Sutfin Funeral Chapel. Due to the weather, military honors will be accorded at the funeral chapel. Interment will be held in the Darling Cemetery. Following the services a luncheon and time of sharing will be held at the VFW Post 6824. Memories and condolences may be shared by visiting his guest book at www.sutfinfuneralchapel.com Flowers will be provided by the family and memorial contributions may be directed to the VFW Post 6824 Axillary Cancer Fund c/o Donna Brink, 757 Tabernacle Rd., LeRaysville, PA 18829 or the Windham Fire Dept. 39158 Route 187, Rome, PA 18837 in loving memory of Kent E. Edsell.

Softly in the morning, you heard a gentle call, you took the hand God offered you and quietly left us all&#8230;.Kent E. Edsell, 85, of Windham, PA passed away peacefully on Thursday morning, January 26, 2017 at the Robert Packer Hospital following... View Obituary & Service Information

The family of Kent E. Edsell created this Life Tributes page to make it easy to share your memories.

Send flowers to the Edsell family.