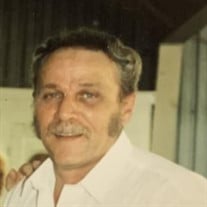 Softly in the morning, you heard a gentle call, you took the hand God offered you and quietly left us all.... Lance O. Bogart, Jr., 73, of Tioga Center, New York passed away peacefully on Wednesday morning, December 8, 2021 at the Robert Packer Hospital. Lance was born on February 20, 1948 in Waverly, NY a son of the late Helen (Richardson) and Lance Bogart, Sr. He attended school at Tioga Central and for forty-seven years worked as a window washer and groundskeeper for IBM in Owego. On January 5, 1974 he married Deborah Winter and together they have shared nearly 48 years of marriage. Lance enjoyed tending to his koi pond, fishing, gardening, listening to music and was an amazing dancer! Lance treasured the time spent with his family and his heart filled with love when he got to hold his great grandchildren. Lance will be greatly missed by his wife Deborah; his daughters: Jennifer Hunt; Heather Warner (Craig Robbins); Lance “Mouch” Bogart III (Barb Ingersoll); his grandchildren: Austin Hunt, Veronica Warner (John Knapp), Alex Hunt, Logan Warner (Brooke Wilkins), Harley Bogart (Bryant Kithcart) and Lance Bogart IV. His great grandchildren: Logan Warner, Jr., Lane Warner and Mia Bogart. His brother George Bogart; aunt Gladys Richardson; His father-in-law: Alfred Winter; brothers and sisters-in-law: Al and Lisa Winter, Charlotte and Gary Vargason, John Winter and Louie Johnson. Several nieces, nephews, cousins and their families also survive. Lance was predeceased by his parents; his sisters Mae Keeney (Emmett Hayford); Martha Johnson; his mother-in-law: Elizabeth Winter; and sister-in-law: Ginny Bogart. Family and friends are invited to attend a period of visitation to be held on Sunday, December 12th from 2 – 4 pm at the Sutfin Funeral Chapel, 273 S. Main St., Nichols. Funeral services and a celebration of his life will be held on Monday, December 13th at 11 am at the funeral chapel. Lance will be laid to rest in the Nichols Cemetery. Memories and condolences may be shared by visiting his guest book at www.sutfinfuneralchapel.com

Softly in the morning, you heard a gentle call, you took the hand God offered you and quietly left us all.... Lance O. Bogart, Jr., 73, of Tioga Center, New York passed away peacefully on Wednesday morning, December 8, 2021 at the Robert Packer... View Obituary & Service Information

The family of Lance O. Bogart Jr. created this Life Tributes page to make it easy to share your memories.

Send flowers to the Bogart family.