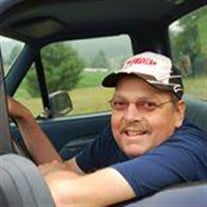 Larry R. Russell, 52, of Rome, PA, passed away peacefully at home on Tuesday, May 26, 2015, with his loving family by his side. After defying health issues for nearly 20 years, he made the courageous decision to turn from medical intervention and walk toward comfort and peace. He will be remembered by many for his dedication to family and community. As a seventh generation farmer, Larry grew up working on the Russell’s bicentennial farm in Rome and eventually took over the management of the family’s dairy operation. Passionate for working in the sugar bush, he learned to master the art of making maple syrup from his father and grandfather and soon became a partner in the family business, Endless Mountains Cabin Maple Syrup. Larry was an active member of the Rome Vigilante Engine Company, since he joined at the age of 19. He soon advanced rank to fire chief, a title he proudly held from 1988 to 2009. Larry’s cheerful disposition and casual wit endeared him to all who met him. As a result, his friends outnumbered the stars. He was friendly, funny and easy to be with. Larry’s hidden talent of impersonation amused his close friends and family. He’s best known for his characterization of Cheech and Chong, Jack Baker (WTTC radio personality), and his mother Liz. Family was the center of Larry’s life, earning him the title of “favorite uncle” (or “bunion toes”) among his many nieces and nephews, whom he cherished as if they were his own. He loved spending time with his siblings as “The Russell Five.” As the eldest son, he is fondly remembered by his siblings for his antics of tossing fresh cow pies at them, laughing when he tricked them into grabbing the electric fence, and taking them on wild Pug rides in the woods. His famous last words following these endearing incidents were, “Don’t tell mom and dad!” An avid NASCAR fan, Larry enjoyed watching the races and cheering for his favorite driver, #24 Jeff Gordon. Nearly as much, he delighted in racing his blue ’68 Mustang along Route 187 and showcasing his pride and joy, a ’57 Chevy Bel Air. Fueled by his love for the outdoors and wildlife, Larry enjoyed spending free time with his buddies fishing at “Little Mississippi” in Canada or deer hunting in the “north woods” and the Adirondacks; and throwing one (or six) back at the end of the day. Larry is survived by his mother, Elizabeth Russell; his father, Rexford (Janet) Russell; a brother, Lincoln (Dawn) Russell; and three sisters, Nancy Russell (John Wacker), Sheila Russell, and Marilyn Russell (Richard Boyd); nephews Chad Russell, Todd (Janette) Pardoe, Matthew (Alycia) Pardoe, William Russell, and Brian Wacker; nieces Jennifer (Kevin) Maines, Elizabeth Wacker, and Danielle Russell; several aunts, uncles, cousins, great nieces and nephews. He will be greatly missed by his beloved dog, Toto. Family and friends are invited to attend a period of visitation and time of sharing memories on Friday, May 29th from 3 – 6 pm at the Sutfin Funeral Chapel, 273 S. Main St., Nichols. A memorial service and celebration of his life will follow at 6 pm with Pastor Richard Vieldhouse, officiating. Memories and condolences for Larry’s family may be shared by visiting our website at www.sutfinfuneralchapel.com. To honor and remember Larry, friends and family may give to the Ronald McDonald House, 333 Westmoreland Dr., Rochester, NY 14620; or the Hope Lodge Hospitality House, 1120 Goodman Street South, Rochester, NY 14620.

Larry R. Russell, 52, of Rome, PA, passed away peacefully at home on Tuesday, May 26, 2015, with his loving family by his side. After defying health issues for nearly 20 years, he made the courageous decision to turn from medical intervention... View Obituary & Service Information

The family of Larry R. Russell created this Life Tributes page to make it easy to share your memories.