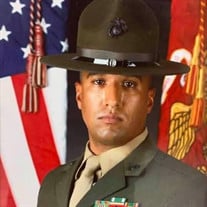 To Watch the Live Stream of Logan's Service Clickhere No farewell words were spoken, no time to say goodbye, you were gone before we knew it and only God knows why. Gunnery Sergeant Logan Kenneth Sowell, USMC, 33, of Beaufort, SC passed away unexpectedly on Tuesday, July 6, 2021. Logan was born June 20, 1988 in Sayre, PA, the son of Kelley Hunt of Endwell, NY and Lester Sowell of Ithaca, NY. Logan was a 2006 graduate of Tioga Central High School, Tioga Center, NY. Logan was a standout athlete in Basketball and track. After high school Logan attended Tompkins County Community College. In that same year he enlisted in the United States Marine Corp, Parris Island, SC. After Bootcamp and training Logan was stationed at MCAS Cherry Point, NC. He deployed in support of Operation Iraqi Freedom in 2008 and Operation Enduring Freedom in 2010. In 2013 Logan reported for Drill Instructor School aboard MCRD Parris Island, SC and was assigned to 1st Battalion, Bravo Company. While at MCRD, he held billets of Drill Instructor, Senior Drill Instructor, and Marine Corps Instructor of Water Survival. After his Drill Instructor duty, Logan checked into Marine All Weather Fighter Attack Squadron 533, MCAS Beaufort, SC. He served as Squadron Operations Chief and Squadron Gunnery Sergeant. In 2020 Logan received orders back to MCRD Parris Island, to Alpha Company, 1st Recruit Training Battalion where he served as Chief Drill Instructor and Company First Sergeant. 2021 Logan received orders to Drill Instructor School East, to serve as an Advanced Curriculum Instructor. Many of Logan’s fellow Marine’s referred to him as “The Base God”. Logan’s pride and joy were his wife and children. He was a loving, husband, father, son, brother, and friend. When not in uniform you would most times see him in anything UNC Tar Heels and most definitely baby blue. Besides his parents, Logan is survived by his wife Tatiana and their children Jayden, Jackson, Brooklynn, Julian, and Lillian. His brother Kameron and sister Kimberly. Stepmother Susan Cole. Several Aunts, Uncles and cousins. A memorial service and celebration of his life will be held on July 24th at 2 pm at the Tioga Central Middle School Auditorium. Memories and condolences may be shared by visiting his guestbook at www.sutfinfuneralchapel.com Caring assistance is being provided by the Sutfin Funeral Chapel, 273 S. Main St., Nichols. In lieu of flowers, the family suggests that donations be made to the Military Suicide Awareness #22ADAY Movement-Military Veteran Project.

To Watch the Live Stream of Logan's Service [Clickhere]https://my.gather.app/remember/gysgt-logan-k-sowell-usmc No farewell words were spoken, no time to say goodbye, you were gone before we knew it and only God knows why. Gunnery Sergeant... View Obituary & Service Information

The family of Gunnery Sergeant Logan Kenneth Sowell created this Life Tributes page to make it easy to share your memories.

To Watch the Live Stream of Logan&#39;s Service Clickhere

Send flowers to the Sowell family.