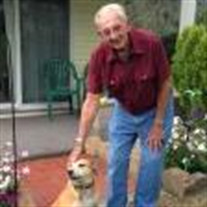 Lyle C. Morris passed away peacefully at his home on Monday, August 31, 2015. Born at home on Orwell Hill, Rome, PA, on February 24, 1927, Lyle moved to his present home when he was just 2 years old. After graduating Rome High School in 1946, during which time he was an avid baseball and basketball player, Lyle enlisted in the U.S. Army during the end of World War II where he served two years stationed in Japan from 1946-1948, where he received the World War II Victory Medal and Army of Occupation Medal. Six of those weeks were spent in a hospital, in isolation, where he was quarantined with scarlet fever. After returning home from the Army, Lyle lived and worked with his mother and dad on their dairy farm in Rome, PA. In 1963, Lyle went to work for Penn DOT, selling his cows and equipment in 1969. In 1967, he and his wife, Betty, whom he married on June 1, 1957, bought the B&L Café in Towanda, PA; a business which they owned until 1992. If you had time to listen, Lyle had stories to tell. These stories showed that Lyle lived life to its fullest and never let any grass grow under his feet. One story that you will never hear told in this day and age is of the time he was on a school bus heading to school on Orwell Hill during a snow storm. When the school bus only made it half-way up Orwell Hill, the students got off the bus and tried to push the bus up the snowy road. When that failed, the school bus driver turned around as the students continued their walk up Orwell Hill to school. Lyle was predeceased by his parents, Clayton and Elizabeth Ford Morris, his sisters, Arline Taylor and Martha Westover and his wife of 55 years, Betty Griggs Morris. He is survived by his four children: Diana (Charles) Dewing, Mickey (Sondra) Morris, Jill (Edward) O’Connor, Bette (Darren) Howell. He is also survived by his 12 grandchildren and 15 great-grandchildren, and his faithful furry friend, Queenie. Lyle was a member of the Rome Presbyterian Church and the Nichols, NY, American Legion. Upon the request of his family, private services will be held for Lyle at the convenience of the family. Donations may be directed to the Bradford County Humane Society, in memory of Lyle C. Morris. Memories and condolences may be shared by visiting our website at www.sutfinfuneralchapel.com.

Lyle C. Morris passed away peacefully at his home on Monday, August 31, 2015. Born at home on Orwell Hill, Rome, PA, on February 24, 1927, Lyle moved to his present home when he was just 2 years old. After graduating Rome High School in... View Obituary & Service Information

The family of Lyle C. Morris created this Life Tributes page to make it easy to share your memories.

Lyle C. Morris passed away peacefully at his home on Monday,...

Send flowers to the Morris family.