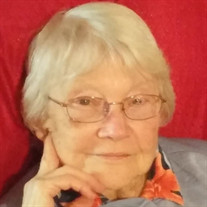 A life well lived is a precious gift, of hope and strength and grace, from someone who has made our world a brighter, better place. Surrounded by her family and those that meant so much to her, Margaret Elizabeth (Woodburn) Chapman, 85, went to her heavenly home on Tuesday morning, June 27, 2017 following a courage battle with Cancer. Margaret was born on June 9, 1932 in Johnson City a daughter of the late Edward and Ida Lillian (Chaffee) Woodburn. She was a graduate of the Rome High School class of 1950. She continued her education at Mansfield State Teachers College and graduated in 1954. Over the years, Margaret shared her love of teaching students in the Union Endicott, Maine-Endwell and Whitney Point School Districts. In 1961 she graduated from Penn State with her degree in Counseling. On July 15, 1953 she married David M. Chapman ~ together they shared fifty-two years of marriage until his passing on September 2, 2005. Margaret and David enjoyed traveling and watching their family grow to include grandchildren and great grandchildren. The twinkle in her eye and her memory will remain in our hearts forever. Those left to treasure her memory are her children: Pamela Zukowski; of Endicott; her son Cameron Chapman of Florida; a brother-in-law: Jack Thomas of Vestal; her special grandchildren: Jason and his wife Crystal Griffiths; Daniel Griffiths and Colleen Laskowski; Kayla and her husband Jason Haight; Cole Zukowski, Morgan Zukowski, Shelby Chapman and Casey Chapman. Her great grandchildren: Ryley, Connor, Aubree, Lillian, Harper Adrian, Aren and soon to be Mason. Her sisters-in-law and brothers-in-law: Janice Chapman, Duane Chapman and Phyllis Finch, Early and Lucille Chapman and Ann Chapman. Many nieces, nephews and their families also survive. Margaret was welcomed into heaven by her parents, her husband David and her sister Ruth Ann. Family and friends are invited to attend a period of visitation on Wednesday, July 5th from 6 to 8 pm at the Sutfin Funeral Chapel, 273 S. Main St., Nichols. A celebration of her life will be held on Thursday, July 6th at 11 am at the Rome Presbyterian Church with her Pastor Rev. Karen Ballard, officiating. Interment will follow in the Rome Cemetery. Memories and condolences may be shared by visiting her guest book at www.sutfinfuneralchapel.com

A life well lived is a precious gift, of hope and strength and grace, from someone who has made our world a brighter, better place. Surrounded by her family and those that meant so much to her, Margaret Elizabeth (Woodburn) Chapman, 85, went... View Obituary & Service Information

The family of Margaret Elizabeth (Woodburn) Chapman created this Life Tributes page to make it easy to share your memories.

Send flowers to the Chapman family.