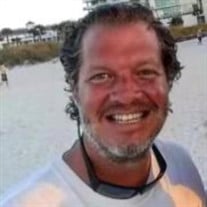 Though absent you are always here, loved, missed and very dear. We know you won’t come back it’s true, but someday we will come to you . . . Our hearts were broken on Wednesday, January 27, 2021 with the sudden passing of our father, son, brother, uncle, and friend, Norman Douglas Bennett, 46, of South New Berlin, New York. Norm was born in Waverly, New York on September 26, 1974, the son of Cathy (Shultz) Hawley and the late Harry D. Bennett. He loved sports and graduated from Tioga Central in 1992 after securing the position of star running back in football and a formidable baseball player. Norm joined the Air Force after high school where he earned a degree in Aviation Maintenance Technology. Norm’s dedication, integrity and intellect combined with his personable character and his extensive knowledge of aircraft presented him with roles in leadership and Unit Deployment Manager in the Air Force and later QA Flight Inspector Specialist for Lockheed Martin, QA Flight Line Inspector for Sikorsky, Air Methods in Sydney and most recently a Quality Control Inspector for Amphenol in Sidney, New York. Norm loved spending time outdoors, escaping on many weekends to Sylvan Beach Lake where he enjoyed boating and eating clams. Escaping to the ocean he also found time to reflect, relax and listen to the peaceful lull of the ocean waves. Norm also enjoyed fishing at Hunts Pond. Norm’s love for sports didn’t end with high school: he was an avid New York Yankees and Giants fan – and Florida Dolphin’s fan as well. Norm always lifted the spirits of those around him, his smile bright and laughter contagious. He loved his family, always proactive with their care and wellbeing. He held a strong faith, deeply rooted, and as such he was able to lend his strength to those around him. Norm will be greatly missed by his son Cody Bennett; his mother and step-father Cathy and Tom Hawley; his sister and brother-in-law: Lora and Dan Wiggins; and his nephew Clay Wiggins. Norm also leaves behind his uncles and aunts: Terry and Shanon Shultz, Dave and Karen Lucas, and Cindy Shirkey; several cousins whom he had many fond childhood memories with. Norm was welcomed into Heaven by his father Harry Bennett, and grandparents: Harold Bennett and Irene Keenan and his uncle David Shirkey. Family and friends are invited to attend a memorial service on Thursday, February 4th at 11 am at the Nichols United Methodist Church, Main St., Nichols. Appropriate precautions will be taken for public health concerns when at the church to include wearing masks and social distancing. A luncheon and period of fellowship will follow at the VFW Post 6824, Rome, Pa at 1:30 pm. Memories and condolences may be shared by visiting his guestbook at www.sutfinfuneralchapel.com Those who wish may kindly consider a gift of remembrance to the family, c/o Sutfin Funeral Chapel, PO Box 72, Nichols, NY 13812 or the Nichols United Methodist Church Sunday School Program, 59-1 N. Main St., Nichols, NY 13812 in loving memory of Norman Douglas Bennett.

Though absent you are always here, loved, missed and very dear. We know you won&#8217;t come back it&#8217;s true, but someday we will come to you . . . Our hearts were broken on Wednesday, January 27, 2021 with the sudden passing of our... View Obituary & Service Information

The family of Norman "Norm" Douglas Bennett created this Life Tributes page to make it easy to share your memories.

Though absent you are always here, loved, missed and very dear....

Send flowers to the Bennett family.