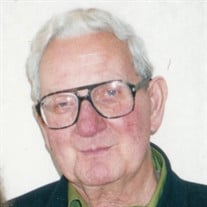 Ollin O. Evans, 89, of Rome, Pa went home to be with his Lord and was reunited with his wife Phyllis on Thursday, February 4, 2021. Ollin was born on August 10, 1931 in Noxen, Pa a son of the late Jacob and Olive Sanders Evans. His mother passed away when he was just five years old and his father later married Margaret Ella Williams. He was the sixth of fifteen children. Ollin proudly served his country during the Korean War. Sent as a medic, he received new orders upon arrival in Korea that he was in the infantry, and instead of medical supplies, he was given a sniper rifle. Throughout Ollin’s military career he earned many commendations and medals. For many years he never talked about his experiences. It was not until his grandson, Denny Cox returned from Bosnia, that he began to share his own wartime stories ~ Ollin never saw himself as a hero. He always expressed that it was the ones who didn’t get to come home who were the real heroes. On April 12, 2014, Ollin was honored to be a guest on the Twin Tiers Honor Flight where he and his son-in-law Dennis Cox, traveled to Washington, DC for a day of recognition for his service to our country. A true experience that he was so very grateful for. Ollin worked at Sylvania in Towanda for 18 years. After an early retirement, he spent his days in his woodworking shop, creating many masterpieces for everyone. Ollin enjoyed hunting and fishing but most of all he loved the Lord and his family. On February 11, 1953, Ollin married Phyllis Marie Fuller and together they raised four children; Robert “Bobby” married to Grace Evans (both deceased) Roy Evans (deceased) married to Susan Walker Evans Lewis; Nioma married to Dennis Cox and Cindy Erickson. Ollin and Phyllis have 27 grandchildren, 47 great grandchildren and are still counting the great grandchildren! He is also survived by a special friend June Rockwell, a brother Denny Evans, two sisters; Nancy Evans Dunbar and Penny Evans Dunbar; a brother-in-law Norman Fuller; numerous nieces, nephews and their families. Ollin was predeceased by his wife Phyllis, who went to be with her Lord and Savior on March 10, 2012. He was also predeceased by many brothers, sisters, two sons and a host of loved ones. Family and friends are invited to attend a period of visitation on Thursday, February 11th from 1 to 3 pm at the Herrickville Wesleyan Church. A memorial service and celebration of his life will follow at 3 pm. Flowers will be provided by the family and memorial contributions may be directed to Guthrie Hospice for the love and care they gave to Ollin while he was in their care. Memories and condolences may be shared by visiting his guestbook at www.sutfinfuneralchapel.com

Ollin O. Evans, 89, of Rome, Pa went home to be with his Lord and was reunited with his wife Phyllis on Thursday, February 4, 2021. Ollin was born on August 10, 1931 in Noxen, Pa a son of the late Jacob and Olive Sanders Evans. His mother passed... View Obituary & Service Information

The family of Ollin O. Evans created this Life Tributes page to make it easy to share your memories.

Send flowers to the Evans family.