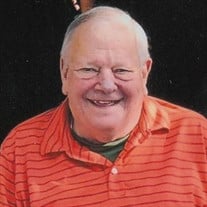 Ralph A. Wheeler, III When someone you love becomes a memory, the memory becomes a treasure ~ Ralph A. Wheeler III, 75, of Smithboro, passed away at his home on Saturday, October 10, 2020 following a courageous battle with Cancer. Ralph was born on April 28, 1945 in Binghamton, the only child of Ralph A. and Sarah (Patterson) Wheeler. He was a graduate of Newark Valley High School class of 1963 and following graduation Ralph continued his studies and was proud to be a graduate of Oklahoma University where he received a degree in Marketing and Finance. In 1967, Ralph entered into the US Army and proudly served his country until 1970. For many years, Ralph was employed as a Budget Officer for the Tioga County Treasury Office. In addition, he also served as a manager for Grand Union and McDonald’s. Ralph was a strong supporter of all sports at Oklahoma University it didn’t matter if it was football, basketball, baseball or softball~ he enjoyed cheering them all on! Ralph also enjoyed fishing, photography, stain glass, sight-seeing, watching NASCAR although his greatest pleasure was being surrounded by his children and grandchildren. Ralph will be greatly missed by his children: Diane and her husband Ron Fountain; Kyle and his wife Chelsea Wheeler; his grandchildren: Taylor, Madison, Hailey, Wyatt and Harper. He is also survived by Cathy, the mother of his children; dedicated friend Bonnie Carpineta; several cousins. Ralph was welcomed into heaven by his parents and his son Jason Wheeler. Abiding with his wishes, services will be held at the convenience of the family at the Sutfin Funeral Chapel, 273 S. Main St., Nichols. Memories and condolences may be shared by visiting his guestbook at www.sutfinfuneralchapel.com Those who wish may kindly consider a memorial contribution to the Nancy Quattrini Fund, Oncology Department, Robert Packer Hospital, Guthrie Square, Sayre, PA 18840. We are very grateful for the love and care our Dad received while he was a patient at Guthrie ~ their kind support will remain in our hearts forever. It broke our hearts to lose you but you didn’t go alone, for part of us went with you the day God called you home ~ We Love You Dad

Ralph A. Wheeler, III When someone you love becomes a memory, the memory becomes a treasure ~ Ralph A. Wheeler III, 75, of Smithboro, passed away at his home on Saturday, October 10, 2020 following a courageous battle with Cancer. Ralph... View Obituary & Service Information

The family of Ralph A. Wheeler III created this Life Tributes page to make it easy to share your memories.

Ralph A. Wheeler, III
When someone you love becomes a memory,...

Send flowers to the Wheeler family.