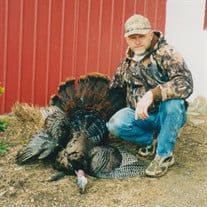 Softly in the morning, you heard a gentle call, you took the hand God offered you and quietly left us all…..Our hearts were broken on Friday morning, April 15, 2016 when well known Dairy Farmer of Peck Hill Farm, Robert C. Brown, 69, of Merry Go Round Road passed away. A life-long resident of Bradford County, Bob was born on April 4, 1947 in Sayre, Pa a son of the late Walter and Louise (Casterline) Brown Tucker. He attended school at Northeast Bradford and was a graduate of the class of 1965. During his high school years and when chores were done, he enjoyed attending dances at Edsell’s Barn. It was there he met, the apple of his eye, Sharon Bennett. The summer months flew by following graduation and he then decided it was time to enter into the next chapter in his book of life. On September 18, 1965 they married and together they have shared 50 years of memories, happiness and farming. A devoted farmer, Bob and his family owned and operated Peck Hill Farm in Windham. He cherished the time spent with his family and seeing his grandchildren’s accomplishments. Bob enjoyed spending time outdoors, hunting and being a farmer. Bob served as Windham Township Supervisor, was Director of the Empire Keystone Milk Cooperative, Bradford County FSA Committee since 2012, and Bradford/Sullivan County FSA Committee Chairman. His smile and caring ways will always remain with us ~ he left us beautiful memories, his love will always be our guide, tho’ we cannot see you, you will always be by our side. Bob will be greatly missed by his wife Sharon Brown, his daughters and son-in-law: Lisa Brown; Kim and Karl Jefferson, his son and daughter-in-law: Bobby and Kelly Brown; his special grandchildren ~ Jordan and his wife Meg Snyder; Colton Snyder; Katy Jefferson, Karlee Jefferson, Carter Brown and Cooper Brown. His brother and sister-in-law: Larry and Lois Brown; brothers-in-law and sisters-in-laws: Curt and Jolie Bennett, Bob and Sandy Wilmot, Bob and Diane Strait, Albie Bennett, Jim and Paula Bennett; an aunt Donna “Cookie” Casterline; several nieces, nephews, cousins and his right hand man, Calvin Whalen. Family and friends are invited to attend a period of visitation on Tuesday, April 19th from 11am to 2 pm and 6 pm to 8 pm at the Sutfin Funeral Chapel, 273 S. Main St., Nichols. A period of visitation will also be held on Wednesday, April 20th from 10 am to 11 am. Funeral services and a celebration of his life will follow on Wednesday, at 11 am with Pastor Larry D. Jennings of the Warren Center Baptist Church. Memories and condolences may be shared by visiting his guest book at www.sutfinfuneralchapel.com The family will be providing flowers and ask that memorial contributions be made to his grandchildren’s 4-H Club ~ The Udder Bunch, c/o Kim Jefferson, 1636 Merry Go Round Road, Rome, PA 18837 in loving memory of Robert C. Brown.

The family of Robert "Bob" C. Brown created this Life Tributes page to make it easy to share your memories.