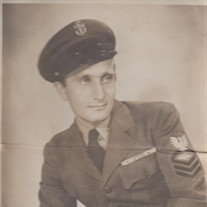 Those we love don’t go away, they walk beside us every day. Unseen, unheard, but always near, so loved, so missed so very dear ~ Robert Wagner Bosler, 97, of Orwell Hill, (Rome, PA) passed away peacefully on Wednesday evening, January 27, 2016 at the Guthrie Towanda Memorial Hospital. Bob, as he was affectionately known by his family and friends was born on November 3, 1918 in Elizabeth, New Jersey a son of the late Gustave and Frida (Wagner) Bosler. He was a graduate of the Abraham Clark High School Class of 1936 in Roselle, New Jersey. In 1938, Bob entered into the US Navy and proudly served his country on board the USS Colorado, USS Indiana, USS Corson, and the USS P. C.763 the famous “Splinter Fleet” till the close of the War with Japan. He was honorably discharged in 1945. On March 10, 1946 in Roselle, New Jersey, Bob married the love of his life, Jo Anne Powell ~ together they have shared nearly 70 years of marriage. For many years Bob was employed at RCA, David Wilmot Hotel, Masonite Corp., Charis Inc., Electro Mechanical although his greatest love was being a farmer and living on Orwell Hill. He enjoyed spending time outdoors, hunting, fishing and farming. Bob was a member of the LeRay Lodge #471, the VFW Post 6824 and the American Battleship Association. Bob will be greatly missed by his loving and devoted wife Jo Anne “Jody” Bosler, his son: Robert Ross Bosler of Gardners, Pa; his special grandchildren: Brandy and her husband Jason Kift; Abigail and her husband Justin Brown; a great granddaughter Estelle Kift. His nieces and nephews: George G. and Nancy Bosler; Lisa Bosler all of NYC; Richard Puckett of Commack, Long Island; a cousin Nicholas and his wife Tina Unger of Texas. Bob was predeceased by his parents: Gustave and Frida Bosler, his son Carl Jay Bosler in 1997; a brother Carl Bosler and a sister Claire Puckett. Family and friends are invited to attend a period of visitation on Sunday, January 31st from 11am to 1 pm at the Sutfin Funeral Chapel, 273 S. Main St., Nichols. A funeral service and a celebration of Bob’s life will follow at 1 pm with Pastor Richard Vieldhouse, officiating. Masonic services will be conducted at the start of the funeral service. Interment and military honors will follow in the Darling Cemetery. Memories and condolences may be shared by visiting our guestbook at www.sutfinfuneralchapel.com Those who wish may kindly consider a memorial contribution to the Fisher House Foundation, a charity for Veterans and their families, 111 Rockville Pike - Suite 420, Rockville, MD 18848 in loving memory of Robert Wagner Bosler.

Those we love don&#8217;t go away, they walk beside us every day. Unseen, unheard, but always near, so loved, so missed so very dear ~ Robert Wagner Bosler, 97, of Orwell Hill, (Rome, PA) passed away peacefully on Wednesday evening, January... View Obituary & Service Information

The family of Robert Wagner Bosler created this Life Tributes page to make it easy to share your memories.

Send flowers to the Bosler family.