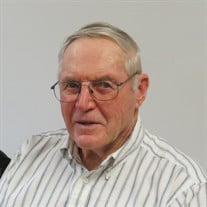 When you lived your life for others and you loved without condition When you made so many laugh and your Smile won’t be forgotten When you left behind an empty place That no one else can fill When the friendships that you shared Long to be renewed When you built your life on hope And fulfilled it every day The footprints that you left behind Will bring us face to face So, goodbye is not forever, You’re only steps away. Surrounded by his family and those he loved so deeply, Russell L. Jones, 96, of Warren Center went home to be with his Lord on Tuesday, January 28, 2020. Russell was born on March 14, 1923, in the same home where he passed away, a son of the late George and Vida (Allyn) Jones. At the age of two, his mother had passed away and he was raised by his step-mother Bessie McCarty Jones. Russell attended school in Warren Center and was a graduate of the LeRaysville High School class of 1939. A year after graduating from school, he attended Penn State University for 2 ½ years taking Dairy Production Courses. He returned home to Warren Center and assisted his father in the operation of the family dairy farm. On September 20, 1947, Russell married the love of his life, Carol Powell, and together they have shared 72 years of marriage ~ a true love story. In 1957, Russell and Carol purchased the farm and continued to operate the farm for 40 years. Over the years, a friendship formed and Vince and Debbie Neville purchased the family farm and the Neville family continues to operate the farm today. Dedicated to his community, Russell always found the time to serve others. He served as chairman, committee member, vice president, and president of the Pennsylvania Holstein Association before he was elected to the Hall of Fame in 1989. In addition, he also shared his knowledge with Sire Power, Pennsylvania DHIA, 4-H and other farming organizations. Russell also was a charter member of the Warren Township Volunteer Fire Company, he served as Past President on the Northeast Bradford PTA, and was a member of the former Warren Center Methodist Church where he served on various committees. Russell will be greatly missed by his wife Carol; a son and daughter-in-law: Norman and Jacque Jones of Brooklyn Heights, NY; his daughters and son-in-law: Janice and Clyde Whipple of Brackney, PA; Donna Jones of Warren Center; five grandchildren: Christopher Jones of San Francisco; Adam Jones of Baltimore; Angela Jones of Brooklyn, NY; Derek and Annette Whipple of Oxford, PA; Brandon and Stephanie Whipple of Leesburg, Va. His five great grandchildren: Meghan, Evan, Esther, Arden and Reed Whipple. Two sisters: Doris Carmack of Fountain Valley, CA and Ruth Wheaton of Warren Center, PA. Many nieces, nephews and friends also survive. Russell was welcomed into heaven by his parents and his grandson Gregory Whipple who died in 2003. Family and friends are invited to attend a period of visitation and time of sharing memories on Friday, January 31st from 2 – 4 pm and 6 – 8 pm at the Sutfin Funeral Chapel, 273 S. Main St., Nichols, NY. A funeral service and celebration of his life will be held on Saturday, February 1st at 10:30 am at the Hope Community Church, 5864 Jackson Valley Road , Warren Center, Pennsylvania. Interment and prayers of committal will follow in the Warren Center Cemetery. Memories, photos and condolences may be shared by visiting his guestbook at www.sutfinfuneralchapel.com Those who wish may kindly consider a memorial contribution to the Bradford Co. Holstein Association c/o Jodi Calkins, Treasure, 63 VanGorder Road, Rome, PA 18837 or the Warren Township Vol. Fire Company, PO Box 24, Rome, PA 18837 in loving memory of Russell L. Jones. Russell, always ended by saying “Everyday is a good day…some days are just better than others.” He would want us to be kind, love our neighbors and serve those in need.

When you lived your life for others and you loved without condition When you made so many laugh and your Smile won&#8217;t be forgotten When you left behind an empty place That no one else can fill When the friendships that you shared Long... View Obituary & Service Information

The family of Russell L. Jones created this Life Tributes page to make it easy to share your memories.

When you lived your life for others
and you loved without condition
When...