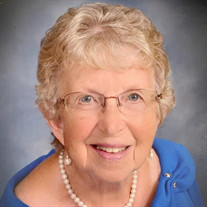 To Watch Shirley's Funeral Service: ClickHere Softly in the morning, you heard a gentle call, you took the hand God offered you and quietly left us all.... With her family at her side, Shirley M. Phillips, 84, of Rome, Pa passed away peacefully at home on Tuesday morning, March 15, 2022. Shirley was born on June 14, 1937, in Sayre, PA, the daughter of the late Edward and Elizabeth Jones. She was a graduate of Rome High School class of 1955. On October 18, 1958, she married the love of her life, Duane Phillips, Sr. and together they have shared sixty-three years of marriage. Shirley began her employment at Farmer’s National Bank before taking time off to devote to raising her children. She returned to work in 1973 and retired from M&T Bank. Shirley’s hands were full with her job, family, and the community. She joined the Rome United Methodist Church on May 4, 1952 and served in many capacities over the years. She was a fifty-year member of Rome Chapter 26 Order of Eastern Star and LeRaysville Chapter 498. She served many years as Worthy Matron and several as District Deputy Grand Matron. Devoted to her community, she also gave of her time serving as secretary of Rome Borough for 12 years and many years as treasurer of the Rome Cemetery Association. She was a very active person and passionate about her hobbies; quilting, crocheting, knitting, gardening, baking, and random acts of kindness for anyone that she felt may need it. Shirley will be missed by her husband of 63 years, Duane Phillips, Sr.; her children: Susan (Michael) Serfass, Duane (Jacki) Phillips, Jr., and Kay (Michael) Low; grandchildren: Emalyn (Mike) Setzer, Adam (Ashley) Phillips, Erin (Brett) Bright, Cameron Low, and Katelyn Serfass (Paul Harkenrider); great grandchildren: Owen, Kinlee, and Jack Setzer, Chase Phillips, and Lachlan Bright; her brother and sister-in-law: Raymond (Sharon) Jones; and many close nieces, nephews, cousins and many special friends. She was predeceased by her parents, her son Alan, grandson Christopher Serfass, brother and sister-in-law Charles and Mary Jones; brother Edward L. Jones Jr. (Roy); and sister-in-law Jean Phillips. Family and friends are invited to attend a period of visitation on Friday, March 18th from 11 - 12:45 pm at the Sutfin Funeral Chapel, 273 S. Main St., Nichols. Order of Eastern Star Services will be conducted at 12:45pm. A funeral service and celebration of her life will be held at 1pm with Pastor Philip Wanck, officiating. For those unable to attend Shirley’s services, a live stream may be watched at: https://my.gather.app/remember/shirley-phillips-2022 Shirley will be laid to rest next to her son Alan in the Rome Cemetery. Memories and condolences may be shared by visiting her guestbook at www.sutfinfuneralchapel.com Those who wish may kindly consider a memorial contribution to the Rome Cemetery, PO Box 2, Rome, PA 18837 or the Rome Fire Dept., PO Box 77, Rome, PA 18837 in loving memory of Shirley M. Phillips.

To Watch Shirley's Funeral Service: [ClickHere]https://my.gather.app/remember/shirley-phillips-2022 Softly in the morning, you heard a gentle call, you took the hand God offered you and quietly left us all.... With her family at her side,... View Obituary & Service Information

The family of Shirley Phillips created this Life Tributes page to make it easy to share your memories.

Send flowers to the Phillips family.