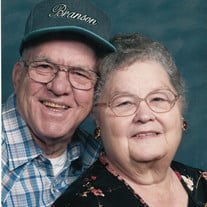 Softly in the morning, you heard a gentle call, you took the hand God offered you and quietly left us all…..Theodore N. Matthews, 85, of Rome, Pa passed away peacefully in his sleep on Monday morning, May 21, 2018 at the Skilled Nursing Unit of Guthrie Towanda Hospital. Ted, as he was affectionately known by his family and friends was born on February 18, 1933 in Wilmot, Pa one of eleven children to David and Bertha (Livingston) Matthews. He proudly served his county with the US Army. On August 13, 1954 he married Donna M. May, together they shared sixty years of marriage until her passing on March 16, 2015. Ted was a man of many talents and throughout his life had various job positions to include a delivery-salesman with John T. Wenck for thirteen years. Many will remember him as custodian at Northeast Bradford others will remember him as a bartender at Sammy’s and Corie’s. A kind and gentle man, Ted also filled the shoes of Santa Claus for nearly fifty years. He was a member of the Towanda American Legion, the Towanda Gun Club and a life member of the Vigilante Fire Company in Rome, Pa. Ted will be greatly missed by his daughter and son-in-law Lisa and John Lewis of Rome; his son and daughter-in-law: Theodore “Ted” and Pam Matthews of Gillett, Pa; his brother David Matthews of Canton, Pa; special grandchildren: Ryan Matthews (Rebecca Keene), Eric Matthews (Erin Casto), Heather (Kevin) Heft, Darcy (John) Vanderpool; his great grandchildren: Savannah Matthews, Allison Heft, Jaxon Matthews and Carter Vanderpool. His sister-in-law: Nannette Light of Wysox, Pa; sisters-in-law and brothers-in-law: Dave and Juanita May of East Smithfield, Pa; Ed and Ellen May of Wysox, Pa; Numerous nieces, nephews and their families also survive. Ted was welcomed into heaven by his wife Donna, his great granddaughter Peyton Marilyn Vanderpool and his siblings; Ida, Hannah, Elsie, Clarence, Edgar, Virginia, Christina, Mary, Walter. Family and friends are invited to attend a period of visitation on Wednesday evening, May 23rd from 6 to 8 pm at the Sutfin Funeral Chapel, 273 S. Main St., Nichols. A funeral service and celebration of Ted’s life will be held on Thursday, May 24th at 10 am at the Sutfin Funeral Chapel, 273 S. Main St., Nichols with Pastor Karen Ballard of the Rome Presbyterian Church, officiating. Interment will follow in the Rome Cemetery. Memories and condolences may be shared by visiting his guestbook at www.sutfinfuneralchapel.com Those who wish may kindly consider a memorial contribution to the Activity Fund at Guthrie Towanda Memorial Hospital-Skilled Nursing Unit, 91 Hospital Drive, Towanda, PA 18848 in loving memory of Theodore “Ted” N. Matthews.

Softly in the morning, you heard a gentle call, you took the hand God offered you and quietly left us all&#8230;..Theodore N. Matthews, 85, of Rome, Pa passed away peacefully in his sleep on Monday morning, May 21, 2018 at the Skilled Nursing... View Obituary & Service Information

The family of Theodore "Ted" N. Matthews created this Life Tributes page to make it easy to share your memories.

Send flowers to the Matthews family.