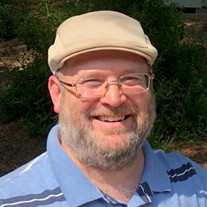 It broke our hearts to lose you, but you didn't go alone, for part of us went with you the day God called you home. Our hearts were broken on Monday, February 7, 2022 with the passing of our loving Thomas E. Knott, 52, of Fredericksburg, Virginia and formerly of Endicott, New York. Thomas was welcomed into our world on September 23, 1969 and is the loving son of George and Jeannette Knott, and big brother to Cheryl. Thom spent his younger years in Endicott and was a graduate of Union-Endicott High School class of 1987. Following high school, Thom continued his education at Broome Community College. It was there he met the love of his life, Samantha Shutts, in a Psychology class. His studies continued and he later graduated from SUNY Binghamton with a Bachelor's Degree in Computer Science. It was a warm summer’s day on July 20, 1991 when Thom and Samantha wed in Owego, New York. Together they shared nearly 31 years of marriage and were blessed with seven beautiful children. Thom always had a twinkle in his eye – he was a kind, big-hearted, caring and loving husband, father, son, brother, and friend. Family was of utmost importance to Thom; he could be found on the sidelines cheering on his kids in all their sports endeavors. Together they all enjoyed family game nights, bowling, and watching movies. Fond memories and stories were always shared while kayaking and fishing with family. Thom always looked forward to his yearly travels with his wife and their friends. Other favorite pastimes of Thom's included reading; regardless of where or when, he was always indulging himself in books of many genres. He was an avid NASCAR fan and loved to cheer on the drivers of Stewart-Hass Racing and Joe Gibbs Racing. Each spring and fall you could find him at Richmond International Raceway enjoying the race. Thom worked for many different companies throughout his career, but truly found his niche at Doctor on Demand where he was Director of Platform Services. It was the amazing people he worked with there that inspired him, so much so that at the end of December 2021, Thom chose a new adventure to join with some of those very same people. It was a passion of his to always reach out and help others, and he was looking forward to that very thing at Endear Health. Thom’s handprint will forever be imprinted on the lives of those he touched. He will be forever remembered by his loving wife Samantha; his children: Larissa Ly and husband Mitchell; Aaron Knott; Ryan Knott and fiancée Thai Patterson; Liam Knott; Tiernan Knott; Ashton Knott; and Meghan Knott. His parents George & Jeannette Knott; sister and brother-in-law: Cheryl & David Capwell and their sons: Jarrett, Tevin and Colby; his father-in-law: Larry Shutts; Aunts and Uncles: Carol Regan, Sue Barton, Patti Barton, Kay & Donny Foote, Jane & Jim Wells, John & Kay Barton. He was predeceased by his Grandparents: George & Helen Knott and Albert & Elizabeth Barton; Uncles: James Barton, Jerry Barton, Robert Barton, Julian Barton; Mother-in-law Sharon Shutts. A celebration of life will be held in New York at a later date. Memories and condolences may be shared by visiting his guestbook at www.sutfinfuneralchapel.com

It broke our hearts to lose you, but you didn't go alone, for part of us went with you the day God called you home. Our hearts were broken on Monday, February 7, 2022 with the passing of our loving Thomas E. Knott, 52, of Fredericksburg, Virginia... View Obituary & Service Information

The family of Thomas E. Knott created this Life Tributes page to make it easy to share your memories.

Send flowers to the Knott family.