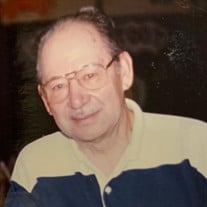 A life well lived is a precious gift, of hope and strength and grace, from someone who has made our world a brighter, better place. It's filled with moments, sweet and sad with smiles and sometimes tears, with friendships formed and good times shared, and laughter through the years. A life well lived is a legacy, of joy and pride and pleasure, a living, lasting memory our grateful heart's will treasure. Our loving Papa, Thomas H. Lee, 97, of Cadis, Pa was reunited with our Mom Ochlee on Tuesday, November 3, 2020. Tom was born on August 20, 1923 in Homer, NY a son of Myrtle Williams. He was a graduate of Warren Center High School. Following graduation, Tom was employed at Corning Glass and Chevy in Buffalo where he worked in the factory attaching brakes on automobiles. The draft came, and Papa proudly served his country with the US Navy during WW 11. Following his honorable discharge in 1946, Papa was living in Buffalo and his heart was still in Warren Center where he was in love with Ochlee. For 86 weeks, he drove his old convertible down every weekend to see her. It was a cold fall day on November 12, 1949, when he and Ochlee were married. Together they shared sixty-one years of marriage until her passing on August 17, 2011. For over fifty years, Papa was a dairy farmer in Cadis with his brother-in-law Ken Prince. He treasured his family and always had a twinkle in his eye. He and Ochlee were members of the Warren Center Baptist Church where he served as Deacon. In addition, he also was a member of the Wappensining Grange and also served on the Northeast Bradford School Board. Tom and Ochlee opened their hearts and lovingly volunteered in the kindergarten class rooms at Northeast Bradford for nearly eighteen years and were known as “Papa and Mammy” to many. When not tending to the chores of the farm, Tom and Ochlee enjoyed traveling in their motorhome and were members of the Winnie’s Club. His memory will forever be cherished by his children: Robert and Lori Lee; Susan and Charlie Camin; Kelly and Dominic Sileo; his grandchildren: Jason Lee, Joshua (Rachel) Lee, Rachel (Joseph) Angolia; Madison (Nina) Lee; Silas Camin, Ockie Camin (and Fiance’ Jason Flint); his great grandchildren: Logan, Owen, Sophia, Lennyn and Thomas. He is also survived by his sister Marilyn Kozlowski and a half brother Francis (Betty) Williams. Many nieces, nephews and their families also survive. Tom was welcomed into heaven by his mother Myrtle; his wife Ochlee; sisters Mary Williams and Doris Lindsey and a brother Freddie Williams. At the request of the family, a private memorial service will be held at the Sutfin Funeral Chapel, 273 S. Main St., Nichols. Memories and condolences may be shared by visiting his guest book at www.sutfinfuneralchapel.com Those who wish may kindly consider a memorial contribution to the Warren Center Baptist Church, 883 Coburn Hill Rd, Warren Center, PA 18851 in loving memory of Thomas H. Lee.

A life well lived is a precious gift, of hope and strength and grace, from someone who has made our world a brighter, better place. It's filled with moments, sweet and sad with smiles and sometimes tears, with friendships formed and good times... View Obituary & Service Information

The family of Thomas H. Lee created this Life Tributes page to make it easy to share your memories.

Send flowers to the Lee family.