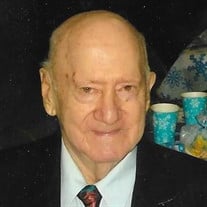 Willis B. Arnold, 87, passed away peacefully on Wednesday, September 27, 2017, at his home in Litchfield, PA. His loving wife of 68 years, Vivian held his hand as he entered heaven's gates. “Willy”, or "Papa", as he was lovingly and affectionately known by his family and friends was born on December 2, 1929, a triplet to Harry and Cora (Brenchley) Arnold. Willy and his 11 siblings grew up in Litchfield, PA and attended Vawter and Litchfield school. He proudly served his country with the US Airforce, then worked for Ingersoll Rand. He and his sons owned and operated Arnold’s Automotive where they had a large salvage yard, garage and moved house trailers. Willy enjoyed bowling with the IR bowling league and had a keen eye for shooting. He attended the Bumpville Bible Church and the Southport Baptist Church. Those left to cherish is memory are his one and only wife Vivian C. (Maslin) Arnold; his sons and daughters-in-law: Rev. Duane and Lisa Arnold of Lockwood, NY; Rick and Tammy Arnold of Litchfield. His grandchildren: Duane Jr. (Darcy) Arnold, Rev. Christopher (Janelle) Arnold, Jessica (Todd) Frutchey, Amanda Sutfin, Auriel (Eric) Patterson, Michael Arnold, Faith Arnold, Lilly Arnold, Rachel (Gerry) Sarnosky, Randy (Joy) Arnold and Jessica (Jonathan) Roberts. Twenty-six great grandchildren; his brother and sister-in-law: Robert and Alfreda Arnold and sister Hetty Rinker. Numerous nieces, nephews and their families also survive. Willy was predeceased by his son Randy Willis Arnold; grandson Carl Watkins, his siblings: Lloyd, Claude, Clyde, Alice, Doris, Harry, Lorena Mae, Wallace and Walter. Family and friends are invited to attend a period of visitation on Wednesday, October 4th from 2 – 3 pm at the Bumpville Bible Church. A memorial service and celebration of his life will follow at 3 pm with his son Rev. Duane Arnold, Rev. Christopher Arnold and Rev. Ben Miller, officiating. Memories and condolences may be shared by visiting his guest book at www.sutfinfuneralchapel.com. Those who wish may kindly consider a memorial contribution to the Bumpville Bible Church, Bumpville Hill Rd, Rome, PA in loving memory of Willis “Willy” B. Arnold.

The family of Willis "Willy" B. Arnold created this Life Tributes page to make it easy to share your memories.

Willis B. Arnold, 87, passed away peacefully on Wednesday, September...

Send flowers to the Arnold family.